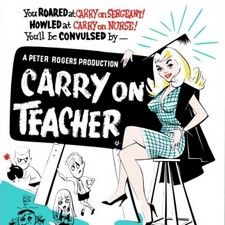 During the current term at Maudlin Street Secondary Modern School, William Wakefield (Ted Ray) – who has been at the school for 20 years – is acting headmaster. He spots an advertisement for a headmaster of a brand new school near where he was born and decides to apply for the post.

Because of a coinciding visit by a Ministry of Education Inspector, Miss Wheeler (Rosalind Knight), and the noted child psychiatrist Alistair Grigg (Leslie Phillips), he decides to enlist the help of his staff to ensure that the school routine runs smoothly during their visit.

While in conference with his teaching staff (including Gregory Adams (Kenneth Connor), science master; Edwin Milton (Kenneth Williams), English master; Michael Bean (Charles Hawtrey), music teacher; Sarah Allcock (Joan Sims), gym mistress and Grace Short (Hattie Jacques), maths teacher); a senior pupil (Robin Stevens, played by Richard O’Sullivan) overhears that Wakefield is planning to leave at the end of term. The pupils are fond of the venerable teacher and Stevens immediately rushes this information to his schoolmates. They plan to sabotage every endeavour that might earn Wakefield praise, which would set him on the road to his new post.

On arrival, Grigg and Miss Wheeler are escorted by Wakefield on a tour of inspection and the pupils go out of their way to misbehave in each class they visit. However Griggs’ tour has not been in vain: he has taken a shine to Sarah Allcock, the gym mistress and it is obvious the feeling is mutual.

Miss Wheeler is disgusted at the behaviour of the children towards the teachers but is softened when she visits the science master’s class, where she feels an instinctive maternal affection for the charm of the nervous science master, Adams.

Wakefield realises his position as headmaster of the new school is in jeopardy and, on seeing Miss Wheeler’s interest in Adams, enlists his help. He asks Adams to make advances to Miss Wheeler to win her over. Adams is aghast at the thought but eventually agrees to do his best. After many unsuccessful attempts to tell Miss Wheeler of his love, Adams finds an untruth has become the truth and finally finds enough courage to declare his love.

The pupils meanwhile, have been doing everything in their power to make things go wrong, and on the last day of term are caught trying to sabotage the prizegiving. They are told to report to Wakefield’s study and after much cross-examination, he learns the reason for the week’s events – the pupils simply did not want to see him leave. Wakefield – deeply moved – tells the children he will not leave and will see them all next term.

Miss Wheeler, softened by her newfound love, announces that she intends to tell the Ministry that staff-pupil relationships at the school are excellent.