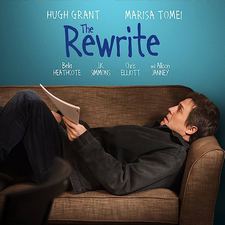 Keith Michaels is a divorced and depressed screenwriter whose only successful work was Paradise Misplaced, which won the Best Screenplay Award fifteen years ago. Unemployed and low on funds after a long period of unsuccessful pitching, he reluctantly takes up a job teaching screenwriting at Binghamton University in Upstate New York.

On arrival, Keith angers fellow professor Mary Weldon with derogatory comments about Jane Austen and other misogynistic behavior; he also strikes up an unethical relationship with a young undergraduate student, Karen Gabney, which ends quickly. Keith also does not believe in the concept of teaching and is scornful of his job, as exemplified by his selecting mostly women students for his class based solely on their appearance and then dismissing the class for a month.

After being publicly challenged by an outraged Karen about his competence, Keith starts to devote more time and effort to coaching his students and helping them discover their passion and improve their writing; he finds great potential in Clem Ronson, a shy and awkward nerd, whose script quickly garners the interest of Keith’s agent, Elle. Keith also forms a friendship with mature student Holly Carpenter, a single mother of two who is in a steady but unloving relationship. The two of them often disagree on their perspectives on life, where Keith believes that nothing will salvage his failing career or mend his relationship with his estranged son Alex, whereas Holly maintains an optimistic outlook on life and believes that with effort, talents can be developed and problems can be solved. Despite their differences, Keith finds enlightenment in Holly’s advice and makes the first move in contacting Alex.

However, Keith’s problems worsen when his outline for Paradise Misplaced II gets rejected and he faces expulsion from the school after his short-lived relationship with Karen is exposed. In frustration, Keith gets into an argument with Holly and decides to leave the school. As a last parting gesture, he accompanies Clem to Manhattan to meet with Hollywood film producers. Halfway through the meeting, Keith has an epiphany about how he has helped his students and, leaving a newly confident Clem to resume the meeting by himself, he heads back to Binghamton to save his job — which he manages to do with a sincere apology to Professor Weldon. In a revelation of his renewed priorities, Keith expresses admiration for Holly’s determination in life and they both confess their love for each other. He also declines Elle’s invitation to return to Hollywood, as he has decided to stay in Binghamton to teach and write a screenplay based on his experience there; and he tells Elle not to call during class hours.

Keith is welcomed back warmly by his students and apologizes to Karen. The film ends with Keith’s phone flashing with a voicemail from Alex.