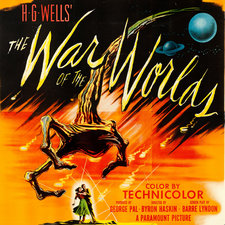 The War Of The Worlds

In southern California, Dr. Clayton Forrester, a well-known atomic scientist, is fishing with colleagues when a large object crashes near the town of Linda Rosa. At the impact site, he meets USC library science instructor Sylvia Van Buren and her uncle, Pastor Matthew Collins. Later that night, a round hatch on the object unscrews and opens. As the three men standing guard at the site attempt to make contact while waving a white flag, a Martian laser gun obliterates them. The United States Marine Corps later surrounds the crash site, as reports pour in of identical cylinders landing all over the world and destroying cities. Three Martian war machines emerge from the cylinder. Pastor Collins attempts to make contact with the aliens, but he is disintegrated. The Marines open fire, but are unable to penetrate the Martians’ force field. The aliens counterattack with their heat-ray and skeleton-beam weapons, sending the Marines into full retreat.

Attempting to escape in a military spotter plane, Forrester and Sylvia crash land and hide in an abandoned farmhouse. They begin to develop closer feelings for each other just before the house is buried by yet another crashing cylinder. A long cable with an electronic eye explores the house and eventually spots them, but Forrester cuts it off using an axe. Later, when a Martian enters the house and approaches Sylvia, Forrester injures it with the axe and collects its blood on a cloth. They escape just before the farmhouse is obliterated. Forrester takes the electronic eye and blood sample to his team at Pacific Tech in the hope of finding a way to defeat the invaders. The scientists discover how the Martian eye works and also note that alien blood is extremely anemic.

Many of the major world capitals fall silent, and global Martian victory is estimated to be only six days away. The United States government makes the decision to drop an atomic bomb on the original group of Martian war machines. The atomic blast however is totally ineffective. As the aliens advance on Los Angeles, the city is evacuated. Then the Pacific Tech trucks are stopped by a mob bent on escape, and all the scientific equipment is destroyed. Forrester, Sylvia, and the other scientists become separated in the ensuing chaos.

Forrester searches for Sylvia in the deserted city. Based on a story she had told him earlier, he guesses that she would take refuge in a church. After searching through several, he finds Sylvia among many praying survivors. Just as the aliens attack near the church, their machines suddenly lose power and crash, one after another. Forrester sees one Martian expire while trying to leave its machine. The narrator observes that while the Martians were impervious to humanity’s weapons, they had “no resistance to the bacteria in our atmosphere to which we have long since become immune. After all that men could do had failed, they were destroyed and humanity was saved by the littlest things, which God, in His wisdom, had put upon this Earth”.