On This Day March

PLOTAfter returning home from White Castle, Harold Lee and Kumar Patel decide to travel to Amsterdam, Netherlands so Harold can surprise his neighbor and newfound girlfriend Maria. At the airport, Kumar argues with a TSA agent for searching him “because of the color of his skin” despite the agent being black. The duo encounter Kumar’s ex-girlfriend Vanessa Fanning, who is engaged to Colton Graham, a college friend of Harold’s whose family has political connections. The plane passengers mistake Kumar’s bong for a bomb and the duo are apprehended by sky marshals. Ron Fox, a neurotic and extremely racist Deputy Secretary of Homeland Security, believes the duo are agents of a joint Al-Qaeda and North Korean conspiracy and send them to Guantanamo Bay detention camp in Cuba. After narrowly avoiding a sexual assault by a guard at the detention camp, Harold and Kumar escape and board a Cuban refugee boat to Miami, Florida where they begin their trek to Texas, hoping Colton can clear their names.

Harold and Kumar endure several misadventures on their way to Texas, such as staying at the home of an incestuous sibling couple and their inbred son; escaping a Ku Klux Klan rally; and visiting a brothel with Neil Patrick Harris, who helps them evade capture from Fox but is shot. When they reach Texas, Colton agrees to help exonerate the duo. However, upon seeing Kumar reconnect with Vanessa, Colton instead delivers Harold and Kumar to Fox. On the flight back to Cuba, Harold and Kumar subdue Fox’s men. When Fox tries confronting them, he is knocked out by Dr. John Beecher (the Vice Chairman of the NSA) after Fox repeatedly treated him poorly. Dr. Beecher accidentally loses his footing, opens a door and falls to his death. Harold and Kumar escape via parachute, and Fox falls to his death while pursuing them. Harold and Kumar land in President George W. Bush’s estate. After smoking cannabis with Harold and Kumar, Bush pardons them. Harold and Kumar are escorted to Vanessa and Colton’s wedding by the Secret Service. They then expose Colton’s betrayal to Vanessa and the guests. Colton attempts to attack them, but Harold punches him out. Kumar consoles a furious Vanessa by reciting a poem he wrote for her in college; they reconcile. Harold, Kumar, and Vanessa travel to Amsterdam where Harold finds Maria, and the couples happily tour the city together while getting high on cannabis. 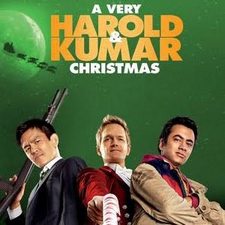 Now this really should be essential viewing for everyone at Christmas and certainly is for me.

Seven years after escaping Guantanamo Bay, and two years after they have last spoken, best friends and roommates Harold Lee and Kumar Patel have gone their separate ways. Harold has given up smoking cannabis, become a successful business man on Wall Street and married his Latina girlfriend Maria. Kumar, on the other hand, is poor and still lives in the messy apartment he once shared with Harold. Kumar got kicked out of medical school because he failed a drug test. Kumar has recently been dumped again by his girlfriend Vanessa, who arrives at Kumar’s apartment to inform him that she is pregnant with his child. Maria’s father and Harold’s father-in-law Mr. Perez decides to stay at Harold and Maria’s house for Christmas. Mr. Perez, who does not like Harold, also brings over his prized Christmas tree that he has been growing for eight years, and gives Harold a short lecture about the tree’s importance. Kumar receives a package with Harold’s name on it at his apartment and decides to deliver it to Harold. At Harold’s house, they discover the item inside to be a large marijuana joint.
Kumar lights it up, but Harold throws it out of the window, only for it to magically land in the tree and burn it down. Harold learns that Kumar’s new friend Adrian is attending a party with a Fraser Fir Christmas tree, and promises to drive him to the party on the condition that he can have the tree. Harold, Kumar, Adrian, and Todd (Harold’s new best friend) arrive at the party, where a girl named Mary attempts to seduce Harold. It turns out that Mary is the daughter of a Russian mob kingpin named Sergei Katsov, who sends two of his men to kill Harold and Kumar, believing that they were trying to rape his daughter. The duo make it out of the building without the Christmas tree and run into their friends, Rosenberg and Goldstein, for the first time in years. Harold and Kumar plan to steal a tree from a church, but end up participating in a Christmas show featuring Neil Patrick Harris, who they thought had died after being shot outside a Texas whorehouse seven years ago. Harris reveals that he did die but Jesus Christ kicked him out of Heaven. Revealing that he can now read their minds, Harris hooks the pair up with a Christmas tree and a Wafflebot before sending them off.

The two make their way to Harold’s house to put up the tree, but end up being kidnapped by two of Katsov’s men, and are saved by Wafflebot. After accidentally shooting Santa Claus in the head, Kumar gives him emergency surgery. In exchange for saving his life, Santa agrees to fly them back home in his sleigh, and reveals that he sent the package to reunite the friends. Harold arrives home to encounter Mr. Perez, who is angered when he discovers his Christmas tree is gone. Harold finally stands up to him, explaining that he may not be the perfect son-in-law, but he is the perfect guy for Maria. Mr. Perez says that he always knew Harold was a nice guy, he just wanted to make sure that he had “cojones” before accepting him into his family. Harold and Kumar rekindle their friendship, Kumar and Vanessa rekindle their romance, and Kumar tells Vanessa that he will re-take the exams to become a doctor for the sake of their child. Maria discovers that she is pregnant on Christmas morning and that Santa has left a replacement tree in their lounge. Harold decides to smoke weed again, and he and Kumar share a joint again for the first time in years.