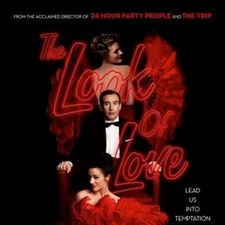 The Look Of Love

The story opens in London in 1992. Paul Raymond returns to his flat, after attending the funeral of his daughter, Debbie. Raymond plays a videotape of a television programme he and Debbie took part in and reflects on their lives. In a flashback to the end of the 1950s, Raymond is an impresario, on the seaside variety show circuit, where he is making a name for himself, by adding semi-nude women to his stage acts.

After a lion attacks the show’s dancers, his wife Jean joins the show. When the Daily Sketch claims that Jean performed nude, Raymond sues the newspaper unsuccessfully but appreciates the ensuing publicity, after which Raymond launches his strip club in London, the Raymond Revue Bar. Its success allows him to expand his property empire, and also indulge in a playboy lifestyle, which his wife tolerates.

At the beginning of the 1970s, Raymond moves into theatrical revues, and casts aspiring actress, Amber St. George, in a nude revue. Raymond moves in with her, and his marriage to Jean ends. Raymond also agrees to meet a grown son, Derry, he sired out of wedlock, but after an awkward dinner together, he gives Derry no more of his time. Tony Power is approached by Paul Raymond to run a new men’s magazine, Men Only.

Tony Power, who was only in his 20s at the time, was subsequently corrupted into a sleazy world, by Paul Raymond, ending in his untimely demise. The magazine is a huge success, in part thanks to roving sex reporter Fiona Richmond, the pseudonym of St. George. Raymond continues to enjoy a hedonistic, coke-fuelled lifestyle. This becomes too much for St. George, and their relationship ends.

Into this mix, his daughter Debbie is introduced. Initially, Raymond tries to make her a star in his theatrical ventures, but she lacks talent, and the show is an unprecedented failure for her.

Debbie marries musician Jonathan Hodge. Jean returns for the wedding, and volunteers to pose nude for Raymond’s magazine. In the delivery room, Debbie gives birth to a girl, after sniffing a line of coke, that her father provides. She dies in 1992, of a heroin overdose. After the funeral, Raymond returns home with his granddaughter, pointing out the property he owns that will someday belong to her.

An epilogue reveals that in December 1992, he was the richest man in Britain.