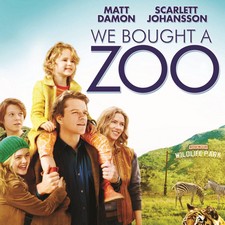 We Bought A Zoo

Loosely based on a true story and transported to the US this is a charming and thoroughly enjoyable film.

Benjamin Mee is still grieving the loss of his wife Katherine and dealing with the expulsion of his 14-year-old son, Dylan, from school, and decides to make a fresh start by buying a new house. He tours many houses with his 7-year-old daughter, Rosie, and his realtor, Mr. Stevens, but finds none he likes until his daughter finds a listing with what seems like the perfect house. They drive to an old large house and Benjamin inspects the property, telling his realtor it is perfect. When they hear a lion roar, Stevens explains that the house comes with a zoo in the back, which closed several years before; if they want the house, they must buy the zoo.
Mee eventually decides to buy the zoo when he sees Rosie happily playing with the peacocks. Dylan, however, hates the idea of moving away from his friends and retreats into his artwork which has grown more macabre since the death of his mother. Benjamin’s brother, Duncan, tries to dissuade him from the purchase, but Benjamin buys it anyway. The zoo staff, led by the 28-year-old head keeper, Kelly Foster, help to start renovating the zoo with the intent to reopen it to the public. When Kelly confronts Benjamin about why he bought a zoo, knowing nothing about running one, Benjamin simply responds, “Why not?” Dylan befriends Kelly’s 13-year-old homeschooled cousin, Lily Miska, who develops a romantic interest that Dylan is oblivious to.

A strict USDA inspector, Walter Ferris, arrives for a surprise inspection and makes a list of repairs that would cost around $100,000, which Benjamin does not have. Rhonda Blair, the zoo’s accountant, gossips that Benjamin will probably sell the zoo. The workers’ morale sinks, fearing the property will be sold to a buyer that will close it down.

When Lily tells Dylan that she heard his family might be leaving, he is overjoyed, which hurts her feelings. Benjamin discovers that his wife bequeathed him an investment account, with instructions to use the money wisely while listening to his heart. Duncan advises him to walk away and start over with the money, but Benjamin decides to use the money to repair the zoo. While this lifts the zoo workers’ morale, Dylan is unhappy about having to stay; he confronts his father, and a scary, heated, metalcore style yelling argument ensues. They reconcile the next morning and Dylan admits he misses Lily. Benjamin gives his son advice using his favorite principle, that you need only 20 seconds of courage to achieve great things. Benjamin realizes that instead of trying to start over by forgetting his wife, he should accept that she will always be a part of him.

Prior to the grand opening of the zoo, the facility passes a very stringent inspection from Ferris, who grudgingly wishes them good luck. Dylan, following his father’s advice, confesses to Lily that he loves her, and she forgives him. The week prior to the opening, the worst rainstorm in 100 years is predicted to wash it out. The weather clears in time, but in the morning they are disappointed when no visitors arrive. They discover that a fallen tree has blocked the access road, with a large crowd of waiting visitors behind it. The staff help them to climb over the tree. There are so many people that they run out of tickets, forcing Benjamin and Kelly to look for more. They end up face to face in a shed, where Kelly admits to Benjamin that she is romantically interested in him and since she “can’t get a handle on it”, she kisses him, telling him that maybe they can do it again on New Year’s Eve; Benjamin kisses her back, and tells her that he is looking forward to it.

Benjamin takes his children to the restaurant where he met their mother, explaining that it was the point where their existence became a possibility. He takes them through that day’s encounter, where Benjamin worked up the nerve to talk to his future wife with “20 seconds of insane courage”, and walks up to the table she was sitting at. He visualizes her sitting there, and asks her why such an amazing woman would talk to someone like him. She responds, “Why not?” 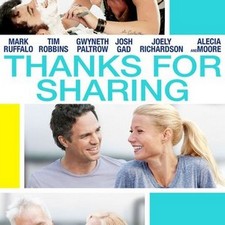 Set in New York City, Thanks for Sharing centers around three people undergoing a 12-step process to recover from their sexual addiction.

Adam meets Phoebe (Gwyneth Paltrow) at a ‘bug party’ and they go out on a date. She reveals that she is a breast cancer survivor and that her ex-boyfriend is an alcoholic; he does not tell her about his own addiction for fear that she will reject him. They begin a relationship. Dede (Alecia Moore) joins the sex addiction meetings, and reveals at her first meeting that she has been addicted to sex since she was a young girl. Neil, a doctor, is caught secretly filming under the skirt of his boss, and is fired. He then begins to take the meetings more seriously, and admits he has a problem. Meanwhile, Mike’s son Danny (Patrick Fugit), a recovering drug addict, has returned home and is attempting to make amends to Mike and his mother Katie (Joely Richardson).

Phoebe eventually finds out about Adam’s sex addiction when finding an addiction token in his pocket the morning after sleeping with him. She takes some time away from him, but eventually agrees to continue their relationship. Neil talks Dede out of having sex with her abusive ex-boyfriend, and they go to a dance together. They come close to kissing, but don’t. Mike and Danny get into a fight when Mike assumes Danny stole his mother’s pills. Danny reveals that Mike gave Katie Hepatitis C, and confronts him about hitting him when he was a child. Mike slaps Danny, who attacks Mike and knocks Katie over; upon realizing what he has done, Danny panics and runs out of the house.

Phoebe has become frustrated with Adam’s reticence to be physical with her, and breaks it off after they have a fight. Adam sleeps with a prostitute. Dede comes over to Neil’s place, and helps him clean up his house and burns his porn. She admits she’s never been ‘just friends’ with a man before. Mike finds Katie’s pills, and realizes Danny didn’t steal them after all. Katie tells Mike off for “always having to be right”, and Mike goes to find Danny. While he is out, Katie calls him to tell him Danny is in the hospital after a DUI. Mike hugs his son in the hospital, who turns out to have been sober for the past eight months. Adam invites his ex-girlfriend Becky (Emily Meade) over, and as they start out by reenacting her father issues, she then wants Adam to slap her. When he refuses, she breaks down, locks herself in the bathroom and attempts suicide. Neil takes the train to get over to Adam’s and breaks down his bathroom door to rescue Becky. Adam gets sober and goes back to Phoebe, who admits she too is not perfect. Neil confronts his inappropriately sexual mother, Roberta (Carol Kane), and all the addicts celebrate their sobriety.