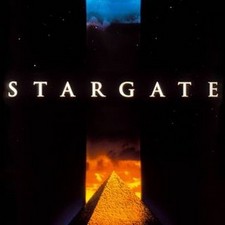 A great film that spawned an even better TV series.

In 1994, Egyptologist and linguist Daniel Jackson, Ph.D., is invited by Catherine Langford to translate Egyptian hieroglyphs on cover stones that her father had unearthed in Giza, Egypt, in 1928. Jackson is taken to a U.S. Air Force installation and told by its commander, Special Operations Colonel Jack O’Neil, that the project is classified information. Jackson determines that the hieroglyphs refer to a “stargate” which uses constellations as spatial coordinates. On this revelation, Jackson is shown that the base has this Stargate, also discovered by Langford’s father. They use Jackson’s coordinates to align the Stargate’s metal ring with markings along its outside, and once all seven are locked in, a wormhole opens, connecting the Stargate with a distant planet. Jackson joins O’Neil and his team, consisting of Reilly, Porro, Freeman, Brown, Ferretti, and Kawalsky, as they pass through the wormhole.

On the arid desert planet, Abydos, they find themselves in a pyramid-like structure. Jackson locates the Stargate’s controls, but lacks the coordinates to return home. Colonel O’Neil orders Reilly, Porro, Freeman, and Ferretti to stay behind to guard the Stargate. Nearby, O’Neil’s group discover a tribe of humans working to mine a strange mineral from the planet. Jackson is able to communicate with them as they speak a variation of Ancient Egyptian, and finds the tribe sees them as emissaries of their god Ra. The tribe’s chieftain Kasuf presents Jackson with his daughter Sha’uri as a gift, and though Jackson initially refuses her, he later becomes romantically attached to her. O’Neil befriends Kasuf’s teenaged son Skaara and his friends, in part because Skaara reminds him of his long-deceased son who had shot himself with O’Neil’s service weapon. Through hidden markings and discussions with the tribe, Jackson learns that Ra is an alien being who had come to Earth during the Ancient Egyptian period, looking to possess human bodies to extend his own life. Ra enslaved these humans and brought some to this planet through the Stargate to mine the mineral that is used in the alien technology. The humans on Earth revolted, overthrew Ra’s overseers, and buried the Stargate to prevent its use. Ra forbade the humans in the tribe from becoming literate, fearing another revolt. During this investigation, Jackson comes across a cartouche containing six of the seven symbols for the Stargate, but the seventh has been broken off.

That night, Ra’s ship lands atop the pyramid structure, and Ferretti and Freeman are captured by Ra’s soldiers, while Porro and Reilly are killed. When Jackson, O’Neil, Brown, and Kawalsky return, they end up in a firefight against Ra’s soldiers. Captured by Ra’s soldiers Jackson and O’Neil are brought before Ra and his guards where it is revealed they are mere humanoids as their armored head-pieces retract. A firefight breaks out and Jackson is killed and the others are captured. Ra places Jackson’s body in a sarcophagus-like device that regenerates him. Ra then explains to Jackson that he has found a nuclear bomb O’Neil secretly brought with him, has used his alien technology to increase its explosive power a hundred-fold, and threatens to send it back through the Stargate. Ra orders the human tribe to watch as he prepares to force Jackson to execute the others to demonstrate his power, but Skaara and his friends create a diversion that allows Jackson, O’Neil, Kawalsky, and Ferretti to escape, with Freeman being killed. They flee to nearby caves to hide from Ra. Skaara and his friends celebrate, and Skaara draws out a sign of victory in a wall, which Jackson recognizes as the final symbol.

O’Neil and his remaining men aid Skaara in overthrowing the remaining overseers, and then launch an attack on Ra, who himself sends out fighter ships against the humans while he orders his ship to depart. The humans outside are forced to surrender to the fighter ships’ pilots when they run out of ammunition, but the rest of the tribe, having the true nature of their false gods revealed by Jackson, rebel against the pilots and overthrow them. Sha’uri is killed, but Jackson takes her body and sneaks aboard Ra’s ship using a teleportation system, leaving O’Neil to fight Ra’s guard captain, Anubis. Jackson places Sha’uri in the regeneration device, and she recovers, but Ra discovers them and attempts to kill Jackson. O’Neil activates the teleportation system, killing Anubis and allowing Jackson and Sha’uri to escape the ship. O’Neil and Jackson use the teleporter to transport the bomb to Ra’s ship; the ensuing blast destroys the ship in space along with Ra. With the humans freed, the remaining team (O’Neil, Kawalsky, and Ferretti) returns to Earth, and Jackson chooses to stay behind with Sha’uri and the others.