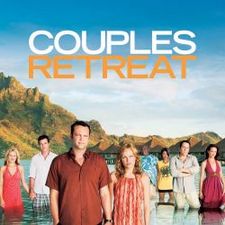 Dave, a dealer for Guitar Hero, and Ronnie, a stay-at-home mom, are a typical couple raising two young children in the suburbs of Chicago. They experience various stresses including redecorating their house and raising their kids. Joey and Lucy are high school sweethearts with a smart but naive teenage daughter named Lacey. Their relationship is on the rocks and they are even considering a divorce once Lacey goes off to college. Jason and Cynthia are a neurotic couple who’ve experienced multiple failed attempts to conceive, and Shane, recently separated (but not legally and officially divorced), has a much younger girlfriend, Trudy.

At Dave’s son’s birthday party, Jason and Cynthia, using a PowerPoint presentation, announce their troubled marriage and are considering divorce as they cannot have a baby. As a last-ditch effort, they have found a couples therapy resort named Eden. A deal called the Pelican Package is half the normal cost if they can get three other couples to join them. In their presentation, they show photos of sunlit beaches and beautiful locations. They assure the others that the couples therapy is purely optional.

Dave and Ronnie insist they can’t go because of their children, declining the trip. In the middle of the night, Jason sets off their alarm to try to sell the idea of the retreat. The commotion wakes the kids, who overheard their parents’ conversations of not being able to go because of them. Fearing their parents are contemplating divorce, the kids have already arranged for Dave’s father, Grandpa Jim-Jim to babysit so their parents can go to Eden.

Upon arrival at Eden West, the four couples are shown their villas. At dinner, resort host Sctanley informs them 6 a.m.couples therapy, is mandatory. If any couple fails to attend, it will be taken as an indication that they want to leave, and a refund for Eden will be given, although not for their airfare. The group debates what to do. After an indulgent dinner with many delicacies, they decide to put up with “a couple of hours” of therapy in order to enjoy the other amenities of the resort.

In the morning, each couple meets with an assigned therapist. All four couples are told they have problems, even Ronnie and Dave, who thought they were fine. They endure resort owner Marcel’s unusual methods, including swimming with and feeding lemon sharks and yoga sessions with amorous instructor Salvadore.

On the fourth night, Trudy escapes to Eden East. The other seven, encouraged by Joey, leave to find her. After Cynthia and Jason argue, the men and women split up. As they try to find their way to the resort, the men end up arguing and pointing out each other’s marriage mistakes.

The women run into Salvadore who takes them to Eden East. The men find the staff lounge where they find Sctanley playing Guitar Hero. He threatens to report them to Marcel, but Dave challenges him to the game (without telling Sctanley that he has helped produce the game). Sctanley, after losing the wager, directs them to Eden East, even though he knows he was tricked by Dave.

When they arrive, Dave realizes what a good thing he has with Ronnie. He goes with her to be alone at a waterfall. Joey finds Lucy with Salvadore and knocks him out, reuniting with her. Cynthia and Jason share drinks and end up becoming intimate. Shane runs into his ex-wife, who admits she still loves him. Shane tells Trudy to remain in Eden East and enjoy being single, then leaves with his ex-wife. All four couples return to Eden West.