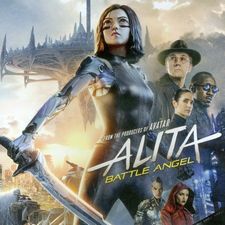 In 2563, 300 years after Earth was devastated by a catastrophic war known as “The Fall,” scientist Dr. Dyson Ido discovers a disembodied female cyborg with an intact human brain while scavenging for parts in the massive scrapyard of Iron City. Ido attaches a new cyborg body to the brain and names her “Alita” after his deceased daughter. Alita awakens with no memory of her past and quickly befriends Hugo, a young man who dreams of moving to the wealthy sky city of Zalem. She also meets Dr. Chiren, Ido’s estranged ex-wife. Hugo later introduces Alita to Motorball, a racing sport played by cyborg gladiators. Secretly, Hugo robs cyborgs of their parts for Vector, owner of the Motorball tournament and the ‘de facto’ ruler of the Factory, Iron City’s governing authority.

One night, Alita follows Ido; they are ambushed by a gang of cyborg serial killers led by Grewishka. Ido is injured, and Alita instinctively fights using “Panzer Kunst,” a lost combat art for machine bodies. She kills two of the cyborgs and damages Grewishka, who retreats. Ido reveals that he is a Hunter-Warrior- a bounty hunter hired by the Factory. Grewishka goes to Dr. Chiren- who is working for Vector- for help. Despite Alita believing that fighting will help her rediscover her past, Ido discourages her from becoming a Hunter-Warrior. Alita finds a highly advanced cyborg body in a crashed spaceship outside the city. Recognizing that the body belonged to a Berserker — deadly shock troops of the enemy nation United Republics of Mars (URM) from the Fall, of which Alita was a member—Ido refuses to install Alita in it.

Frustrated with Ido, Alita registers herself as a Hunter-Warrior. At the Kansas Bar, she and Hugo are unable to recruit other Hunter-Warriors to help her take down Grewishka. Zapan, a cyborg Hunter-Warrior bully, provokes Alita, and she severely beats him in a fight, triggering a chaotic bar brawl until Ido arrives to intervene. Suddenly an upgraded Grewishka appears and challenges Alita to a duel, revealing that he has been sent by Zalem’s technocrat overlord, Nova, to destroy her. Despite her combat skills, Alita’s body is damaged by Grewishka, before Ido, Hugo and Hunter-Warrior dogmaster McTeague arrive and force Grewishka to retreat. Ido apologizes and transplants Alita into the Berserker body.

Having fallen in love with Hugo, Alita enters a Motorball tryout race for the prize money to send Hugo to Zalem. Hugo’s relationship with Alita leads him to decide to quit his criminal job. He confronts his partner Tanji, but Zapan appears, kills Tanji and frames Hugo for the murder of another cyborg. Hugo narrowly escapes and calls Alita for help; she abandons the race and finds him just as Zapan does. Zapan mortally wounds Hugo. Dr. Chiren, having changed her mind about working for Vector, offers to help save Hugo by attaching his severed head to Alita’s life support system. When Zapan sees through the trick and attempts to stop Alita, she seizes his prized Damascus blade and injures him.

Ido transplants Hugo’s head onto a cyborg body and tells Alita that Vector’s offer to help Hugo reach Zalem was a lie; as an exiled citizen of Zalem, Ido is certain that citizens of Iron City cannot enter Zalem without becoming a motorball champion. Alita storms the Factory and confronts Vector, who reveals that Chiren has been harvested for her organs. Vector summons Grewishka, but Alita’s new nanotech body allows her to easily destroy him. She forces Nova to speak to her through Vector. When Nova threatens to harm her friends, Alita fatally stabs Vector.

Ido tells Alita that Hugo has fled to climb a cargo tube towards Zalem. Alita catches up to him and pleads with him to return with her. He eventually agrees, but a serrated defense ring dropped by Nova shreds his body and throws him off the tube. Alita catches him but cannot pull him up. Hugo thanks Alita for saving him before falling to his death.

Months later, Alita is a rising superstar in the Motorball tournament. Cheered on by the crowd, she pledges vengeance by pointing her plasma-charged sword toward Zalem, where Nova watches from above, smirking. 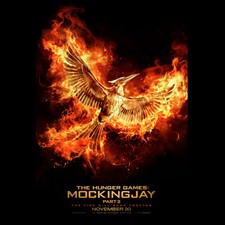 After being attacked by a brainwashed Peeta Mellark, Katniss Everdeen joins an assault on the Capitol’s armoury in District 2. An aggravated civilian shoots her, but she is saved by her bulletproof Mockingjay suit. President Coin refuses to let Katniss join the “Star Squad”, a group of rebels set to infiltrate the Capitol, but Johanna offers to cover Katniss while she sneaks on board a helicopter on its way to the Star Squad. She meets up with the team, which includes Gale, a recently-married Finnick, and Peeta, who is still not fully recovered.

Led by Boggs, the team makes their way to the Capitol, evading booby-trapped “pods” placed along the way with Boggs’ holographic map (the “holo”). Boggs is fatally wounded by a pod and bestows the holo to Katniss before dying. The squad accidentally trigger another pod, releasing a flood of lethal black tar, and Peeta momentarily succumbs to his conditioning and attacks Katniss, killing Mitchell in the process. Most of the squad escapes, unbeknownst to the Capitol.

Katniss refuses to kill Peeta, but Gale states that he would kill him if needed. The Capitol broadcasts another message of Snow’s denouncement of the rebellion, but the rebels hijack the air, and Coin gives an impassioned eulogy that rallies the rebels. Katniss and the Star Squad attempt to advance through the sewers but are caught on camera. They are ambushed by genetically engineered “mutts” that kill four squad members, including Finnick.

Snow invites Capitol citizens to take shelter at his mansion, forming a human shield. Katniss and Gale plan to sneak into Snow’s mansion to assassinate him. On the way, a massive explosion disrupts their plan. In the confusion, Peacekeepers herd Capitol children toward the palace gates, when a hovercraft with a Capitol insignia bombs the crowd, causing mass casualties. As the rebel medics, including Katniss’s sister Prim, tend to the injured, the second wave of bombs are dropped, killing Prim and knocking Katniss unconscious.

Katniss awakens, and Haymitch informs her the rebels have won because the senseless bombing turned the Capitol citizens against Snow. Katniss confronts Snow, who explains that Coin staged the bombing to turn the Peacekeepers against Snow. Katniss realizes Gale had suggested a similar strategy to her, and is stunned when Gale cannot deny his part in Prim’s death.

Coin calls a meeting of the surviving Hunger Games victors, where she declares herself the interim President of Panem. She calls for a vote for a final Hunger Games, but instead uses the children of Capitol leaders as revenge. Katniss votes yes, under the condition that she is able to execute Snow. At Snow’s execution, Katniss kills Coin instead, which causes a riot of citizens to also kill Snow. Peeta stops Katniss from committing suicide and she is arrested. In captivity, Haymitch brings Katniss a letter from Plutarch assuring she will be pardoned, there will be no “last Hunger Games”, and she will be able to return to District 12.

When home, she screams at Buttercup that Prim is never coming back, before embracing the cat. She finds Peeta, who has fully recovered from his conditioning and is planting Primrose flowers in the garden. They receive a letter from Annie, Finnick’s wife, telling them that her and Finnick’s son has been born, that Katniss’ mother is still treating survivors and Gale was promoted to Commander. Commander Paylor is elected the new President of Panem.

Years later, Katniss and Peeta, now married, play with their two children in a field. Their infant daughter cries from a nightmare, and Katniss promises to tell stories of her role in The Hunger Games and the rebellion.