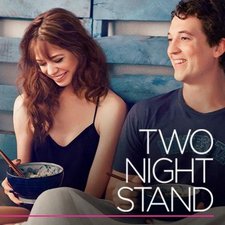 Megan is unemployed and single, and one day she joins a dating website. Her roommates, who just want her to move out, invite her to a party at a club. After a bouncer refuses to let her into the club on the grounds that she looks too young and she is without ID, she sees her ex-fiancé, Chris, and later decides to have a one-night stand with one of the men she saw on the website, Alec.

The next morning, they are less than cordial to each other, but Megan can’t leave because of a blizzard. Forced to spend more time together, the two end up telling each other what they did wrong the previous night, convinced that they will never see each other again, and Megan suggests that they “try again”. The two make love again, with far better results.

Afterwards, Megan discovers a closet full of women’s clothes, and pictures of Alec with a girl. She finds out that Alec’s girlfriend, Daisy, had written a note to him, saying that she wanted to break up, but hadn’t given it to him, but he had found it accidentally. Alec wanted to have something to rub in her face when she broke up with him, and so he had joined the dating website. Angry, Megan leaves.

When Daisy returns, she finds a note that Megan had scribbled, and she and Alec exchange the notes that they had found, and they break up. At a New Year’s Eve party, Megan is arrested because the same note was found in Alec’s neighbour’s apartment, which the two had broken into earlier. Alec arrives at the prison with flowers and balloons. He pays bail, but Megan refuses to see him or even leave the holding cell.

Later, when her roommates come to pay bail, Alec apologizes, saying that he didn’t know her last name and that this was the only way he thought he could see her again. He says that it might be something that the two of them would laugh about years later, but Megan is still angry because she had to spend time in jail. She makes him a deal, asking for his number and promising to call him the moment she laughed about it. She takes a closer look at the presents he gave her. Minutes later, she starts laughing upon seeing the balloon read “I’m sorry, I’m an asshole” and calls Alec. He meets her outside the police station and they kiss in the middle of the road when it starts snowing again.