On This Day April Elle Fanning 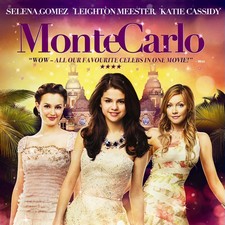 Predictable but fun teen comedy and who complains when you have Selena Gomez in a bikini?

Grace Bennett (Selena Gomez) is a New York University bound, Texas high-school student who works as a waitress with her best friend, high school dropout Emma Perkins (Katie Cassidy) to earn money for a trip to Paris after graduation. Grace’s stepfather pays for her uptight older stepsister Meg Kelly (Leighton Meester) to come with them on the trip. Emma goes to Paris despite her boyfriend Owen’s (Cory Monteith) proposal of marriage. The trip quickly proves to be a disappointment-they have been ripped off with a cramped hotel room and a tour that moves too fast for anyone to properly appreciate anything. After being left behind by their tour guide, the three girls seek refuge from the rain in a posh hotel. There, the hotel staff and paparazzi mistake Grace for the spoiled celebutante British heiress Cordelia Winthrop-Scott, Grace’s double, who leaves rather than stay to attend an auction for a Romanian charity for which she is to donate an expensive Bulgari necklace. The three girls spend the night in Cordelia’s suite, and the next day fly to Monte Carlo with Cordelia’s luggage, despite Meg’s misgivings.
At Monte Carlo the girls meet Theo Marchand (Pierre Boulanger), the son of the philanthropist hosting Cordelia. Theo is cold towards the three, because he dislikes Cordelia’s spoiled brat nature, but he escorts them to a ball, where Grace successfully fools Cordelia’s aunt Alicia (Catherine Tate) and Emma dances with a prince (Giulio Berruti). Meg reunites with Riley (Luke Bracey), an Australian backpacker and ex-rugby player she briefly met in Paris. They find they have things in common, and spend time together before he leaves for Italy. When Grace has to take part in a game of polo, Alicia discovers the impersonation because of Grace’s different riding style. Alicia believes that Grace is a lookalike, hired by Cordelia to take her place while she parties, but in order not to endanger the charity auction she agrees to keep silent. Theo is attracted to “Cordelia’s” frank personality, while Emma’s prince invites her to a party on a yacht. Emma dresses up for the party in the Bulgari auction necklace but meets Meg on the way, and Meg takes it for safekeeping, but later forgets about it, accidentally leaving it in Riley’s backpack. At the party, Emma is disillusioned by the prince’s obnoxious nature and snideness and arrogance towards the waitresses.

Owen arrives in Monte Carlo in search of Emma. So does Cordelia, and she sees the newspaper account of Grace’s appearance at the ball. She finds that the necklace is missing and calls the police. The girls have gone in search of Riley but he shows up at the hotel with the necklace; they find Cordelia in the room. When Cordelia threatens to call and withdraw the necklace from the auction, the girls panic and tackle her to the couch. When people come to the door, they muffle her screams and Grace covers for them. They then tie her to a chair and gag her by stuffing an apple in her mouth so Grace can take her place at the auction. Cordelia escapes, and reveals Grace’s fraud at the auction. She demands that Grace be arrested, but after Grace’s sincere public confession Alicia bids the unexpectedly large amount of €6 million for the necklace to save her. The film ends with Cordelia being forced to move in a ranch, Meg joining Riley on his travels around the world; Owen and Emma moving into their own home in Texas; and Theo and Grace reuniting at the Romanian school where the former works and the latter volunteers at.