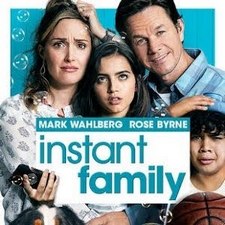 Husband and wife Pete and Ellie Wagner, taunted by relatives who think they will never have children, consider adoption. They enroll in foster care, led by social workers Karen and Sharon. At a fair to meet foster children, Ellie voices her reluctance to adopt a teen, and is confronted by 15-year-old Lizzy, who impresses Pete and Ellie.

Karen and Sharon reveal that Lizzy has two siblings, ten-year-old Juan and six-year-old Lita, and their mother is a drug addict currently in prison. The Wagners’ meeting with Lizzy and her siblings does not result in an immediate “cosmic connection”, leading them to reconsider. At Thanksgiving dinner with Ellie’s family, Pete and Ellie explain they have decided not to adopt. The family admits that no one really believed they should adopt, which spurs Ellie to go through with fostering the siblings.

Lizzy, Juan, and Lita move in with the Wagners, whose lives become hectic – Lita refuses to eat anything but potato chips, Juan is overly emotional, and Lizzy resents Ellie’s attempts to parent her. The Wagners turn to a support group of their fellow foster parents. Pete’s mother Sandy wins the siblings over by taking the family to Six Flags, but Lizzy disappears with friends and returns late, prompting Pete to ground her.

When Pete and Ellie confront Lizzy as she leaves the house, Juan accidentally shoots a nail into his foot. Seeing Pete and Ellie rush Juan to the hospital and comfort Lita, Lizzy begins to warm to them, and Pete invites her to vent her frustrations by demolishing a house he is renovating. Lita calls Pete “daddy” after he fixes her doll, and Juan tells Ellie, “Good night, mommy” when she comforts him after a nightmare.

Pete and Ellie meet Carla, the siblings’ mother, who has been released from prison and wants to reunite with her children. The Wagners express their feelings to the support group, but the social workers explain the system’s main goal is to keep families together, and the children might return to their biological mother.

Carla’s meetings with her children disrupt the Wagner household; the children become more unruly, leaving Pete and Ellie demotivated and frustrated. They are horrified to discover Lizzy taking naked pictures of herself to send to someone at school named Jacob, who sends her a naked photo of himself. Pete and Ellie seek out the Fernandez family, whose adoptive daughter Brenda had inspired them at their orientation; though Brenda is back in rehab, Mr. and Mrs. Fernandez assure the Wagners that “things that matter are hard.”

Taking the children to school the next day, Pete and Ellie confront a student named Charlie, mistaking him for Jacob. Discovering Jacob is actually the school’s 22-year-old janitor, they beat him up and he is arrested, as are Pete and Ellie, leaving Juan and Lita in the car. Returning home after posting bail, Pete and Ellie are told by Sandy that they need to reassure Lizzy that they love her.

At the children’s court hearing, the judge reads a statement from Lizzy, detailing Pete and Ellie’s actions in a negative light. He refuses to let Ellie read her own statement, and the children are returned to Carla’s care. Juan and Lita do not want to leave the Wagners, but Lizzy is ready. Karen and Sharon arrive to inform Lizzy that Carla is not coming to get them, having failed to appear that morning, and seems to be using drugs again. Heartbroken, Lizzy runs away, but Pete and Ellie chase after her and tell her they love her, and the trio reconcile.

Four months later, the family attends a new court hearing, where the judge finalizes Pete and Ellie’s adoption of Lizzy, Juan, and Lita. They all pose for a picture, joined by their families and fellow foster families.