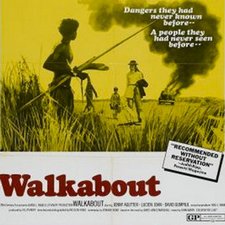 A white teenaged schoolgirl, her younger brother, and their father drive from their home in Sydney into the Australian outback, ostensibly for a picnic. As they prepare to eat, the father draws a gun and begins firing at the children. The boy believes it to be a game, but the daughter realizes her father is attempting to murder them, and flees with her brother, seeking shelter behind rocks. She watches as her father sets their car on fire and shoots himself in the head. The girl conceals the suicide from her brother, retrieves some of the picnic food, and leads him away from the scene, attempting to walk home through the desert.
By the middle of the next day, they are weak and the boy can barely walk. Discovering a small water hole with a fruiting tree, they spend the day playing, bathing, and resting. By the next morning, the water has dried up. They are then discovered by an Aboriginal boy. Although the girl cannot communicate with him, due to the language barrier, her brother mimes their need for water and the newcomer cheerfully shows them how to draw it from the drying bed of the oasis. The three travel together, with the Aboriginal boy sharing Kangaroo meat he has caught from hunting. The boys learn to communicate slightly using words and sign language.

While in the vicinity of a plantation, a white woman walks past the Aboriginal boy, who simply ignores her when she speaks to him. She appears to see the other children, but they do not see her, and they continue on their journey. The children also discover a weather balloon belonging to a nearby research team working in the desert. After drawing markings of a modern-style house, the Aboriginal boy eventually leads them to an abandoned farm, and takes the small boy to a nearby road. The Aboriginal boy hunts down a water buffalo and is wrestling it to the ground when two white hunters appear in a truck and nearly run him over. He watches in shock as they shoot several buffalo with a rifle. The boy then returns to the farm, but passes by without speaking.

Later, the Aboriginal boy lies in a trance among a slew of buffalo bones, having painted himself in ceremonial markings. He returns to the farmhouse, catching the undressing girl by surprise, and initiates a mating ritual by performing a courtship dance in front of her.[5] Although he dances outside all day and into the night until he becomes exhausted, she is frightened and hides from him, and tells her brother they will leave him the next day. In the morning, after they dress in their school uniforms, the brother takes her to the Aboriginal boy’s body, hanging in a tree. Before leaving, the girl wipes ants from the dead boy’s chest. Hiking up the road, the siblings find a nearly-deserted mining town where a surly employee directs them towards nearby accommodation.

Much later, a businessman arrives home as the now grown-up girl prepares dinner; while he embraces her and relates office gossip, she either imagines or remembers a scene in which she, her brother, and the Aboriginal boy are playing and swimming naked in a billabong in the outback.