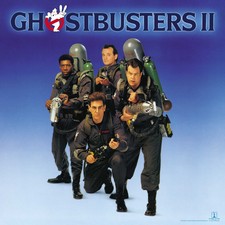 Five years after saving New York City from destruction by the shape-shifting god Gozer, the Ghostbusters have been sued for the property damage incurred and barred from investigating the supernatural, forcing them out of business. Ray Stantz now owns an occult bookstore and works a side job alongside Winston Zeddemore as unpopular children’s entertainers, Egon Spengler works in a laboratory experimenting with human emotions, and Peter Venkman hosts a television talk show about psychics.

Dana Barrett, Peter’s ex-girlfriend, has an infant son named Oscar with her ex-husband and works at an art museum cleaning artwork. She contacts the Ghostbusters after Oscar’s baby stroller rolls, seemingly independently, into a busy intersection. At the museum, a painting of Vigo the Carpathian, a 16th-century European tyrant and powerful magician, comes to life and enslaves Dana’s boss, Janosz Poha. Vigo orders Janosz to bring him a child to possess, allowing him to escape the confines of his painting and live again to conquer the world. Because of his infatuation with Dana, Janosz chooses Oscar.

Meanwhile, the Ghostbusters excavate the intersection where Oscar’s stroller stopped and discover a river of slime running through the abandoned Beach Pneumatic Transit system. Ray obtains a sample but is attacked by the slime and accidentally breaks a pipe that falls onto a power line, causing a citywide blackout. The Ghostbusters are arrested and taken to court for the damage and for investigating the supernatural. Upon presentation as evidence, the slime sample responds physically to the judge’s angry tirade against the Ghostbusters and then explodes, summoning the ghosts of the Scoleri brothers, whom he sentenced to death. The Ghostbusters capture the ghosts in exchange for a dismissal of the charges and the right to resume their business.

One night, the slime invades Dana’s apartment, attacking her and Oscar. She seeks refuge with Peter, and they rekindle their relationship. The Ghostbusters discover the slime reacts to emotions and suspect it has amassed from the negative emotions of New Yorkers. Determining Vigo and the slime are connected, Egon, Ray, and Winston investigate the river of slime, but they are pulled in. They emerge at the museum and begin fighting each other until Egon realizes the slime’s negative energy is influencing them.

The Ghostbusters tell the mayor of their suspicions but are dismissed; his assistant Jack Hardemeyer has them committed to a psychiatric hospital to protect the mayor’s political interests. A spirit appearing as Janosz kidnaps Oscar, and Dana pursues them into the museum, which is then covered with impenetrable slime. On New Year’s Eve, the slime rises to the streets, causing widespread supernatural chaos. Discovering Hardemeyer’s actions, the mayor fires him and has the Ghostbusters released.