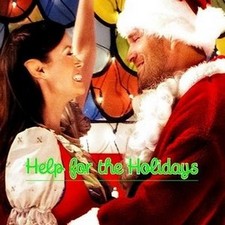 Help For The Holidays

Sara Vancamp (‘Eva LaRue’) is a busy mom with no Christmas spirit. Christine (Summer Glau), an elf from Santa’s village who wonders if there could be more to life than making toys in the North Pole, comes to the real world to help the VanCamp family, mom Sara (La Rue), dad Scott (Gauthier), and their two kids, re-discover Christmas spirit.