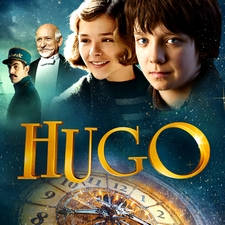 In 1931 Paris, 14-year-old Hugo Cabret lives with his widowed father, a clockmaker who works at a museum. Hugo’s father finds a broken automaton – a mechanical man created to write with a pen. He and Hugo try to repair it, documenting their work in a notebook. When his father dies in a fire, Hugo goes to live with his father’s alcoholic brother, Uncle Claude, who maintains the clocks at Gare Montparnasse railway station. When Claude goes missing, Hugo continues maintaining the clocks, fearing that Station Inspector Gustave Dasté will send him away if Claude’s absence is discovered. Hugo attempts to repair the automaton with stolen parts, believing it contains a message from his father, but the machine requires a heart-shaped key.

Hugo is caught stealing parts from a toy store, and the owner, Georges, takes his notebook, threatening to destroy it. Georges’ goddaughter Isabelle suggests that Hugo confront Georges and demand it back. Georges proposes that Hugo work at his toy store as recompense, and after some time he might return the notebook. Hugo accepts and commences work, in addition to his job maintaining the clocks. Isabelle and Hugo become fast friends, and Hugo is astonished to see she wears a heart-shaped key, given to her by Georges. Hugo shows her the automaton, which they activate with the key. It draws a scene from the 1902 film A Trip to the Moon, once described to Hugo by his father. Isabelle identifies the drawing’s signature as that of “Georges Méliès” – her godfather. She sneaks Hugo into her home, where they find a hidden cache of drawings, but they are discovered by Georges.

Several days later, at the Film Academy Library, Hugo and Isabelle find a book about the history of cinema that praises Méliès’ contributions. They meet the book’s author, René Tabard, a film expert who is surprised to hear Méliès is alive, as he disappeared after World War I along with the copies of his films. Excited at the chance to meet Méliès again, René agrees to meet Isabelle and Hugo at Georges’ home to show his copy of A Trip to the Moon.

Finding the heart-shaped key on the station railway tracks, Hugo drops down to the track to retrieve it and is run over by an out-of-control train that smashes through the station. He wakes up from the nightmare, but hears an ominous ticking emanating from himself, and discovers he has been turned into the automaton. Hugo wakes up again: it was only another nightmare.

At Georges’ home, his wife Jeanne allows them in after René recognises her as Jeanne d’Alcy, an actress in many of Méliès’ films. They play the film, waking Georges, who is finally convinced to cherish his accomplishments rather than regret his lost dreams. Georges recounts that, as a stage magician, he was fascinated by motion pictures and used film to create imaginative works through his Star Film Company. Forced into bankruptcy after the war, he closed his studio and sold his films. He laments that even an automaton he built and donated to a museum was lost; Hugo realizes it is the one he has repaired.

Hugo races to the station to retrieve the automaton but is caught by Gustave, who has learned of Claude’s death. Gustave threatens to take Hugo to the orphanage. Hugo runs away and manages to evade Gustave by hiding on the outer face of the clock tower, precariously balancing hundreds of feet above the ground. After climbing back down, Hugo races to escape the station but drops the automaton on the tracks. He jumps down to retrieve it and is almost run over by a train, but Gustave saves him and the automaton. Georges arrives and tells Gustave, “This boy belongs to me.”

Sometime later, Georges is named a professor at the Film Academy and is paid tribute through a showcase of his films recovered by René. Hugo and his new family celebrate at the apartment, and Isabelle begins to write down Hugo’s own story.