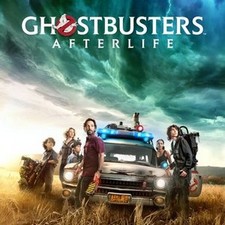 In June 2021, Egon Spengler captures an entity in occultist Ivo Shandor’s mine in Summerville, Oklahoma, and lures a separate creature to his farm. Egon activates an elaborate setup in his ground, but the power fails, and he conceals the ghost trap in his home before being attacked by the creature and suffering a fatal heart attack. His estranged, financially struggling daughter Callie inherits the farm, and moves there with her children Trevor and Phoebe after being evicted from their Chicago apartment. Trevor becomes infatuated with carhop Lucky Domingo, and the scientifically-minded Phoebe enrolls in a summer science class taught by seismologist Gary Grooberson.

Phoebe discovers the farmhouse is haunted and the ghost residing in it leads her to the ghost trap, which she shows to Gary and her new friend Podcast. Gary, a fan of the Ghostbusters, helps Phoebe learn more about them and her grandfather. He, Phoebe, and Podcast tamper with the trap, releasing one of Gozer the Gozerian’s Sentinels that escapes to the mine. The farm ghost leads Phoebe to Egon’s underground laboratory and, realizing the ghost is her grandfather, she restores the Ghostbusters’ equipment under his guidance. While testing the proton pack with Podcast, they fight a ghost that haunts Shandor’s foundry and flees to the town. Having repaired the Ghostbusters’ Cadillac Ecto-1’s engine, Trevor uses the car to chase the ghost with Phoebe and Podcast; they capture the ghost but are arrested for the damage incurred and their equipment is seized. Recalling the Ghostbusters’ telephone number, Phoebe contacts Ray Stantz for help and tells him Egon has died. Ray in turn informs Phoebe of what became of the Ghostbusters following their defeat of Vigo the Carpathian[b] and reveals that after the Ghostbusters had disbanded, Egon had stolen equipment and moved to Summerville to pursue an unspecified threat. Egon’s ghost leads Callie to a wall of detailed notes and pictures he kept of his daughter’s life, showing he cared about her more than she thought.

Phoebe, Podcast, Lucky, and Trevor find a Gozerian temple within the mine. Exploring further, they discover Shandor is alive in his casket, and automated proton cannons installed by Egon that hinder Gozer’s attempts to cross over. Zuul and Vinz Clortho possess Callie and Gary, respectively, and destroy Egon’s equipment, allowing Gozer to escape. Shandor awakes and pledges his fealty to Gozer but is killed, nonetheless.

The children discover Egon’s setup is a trap field, an array of traps buried around the property. With the town distracted by supernatural chaos, the children recover the seized equipment and travel to the mine. Phoebe distracts Gozer so Podcast can capture Zuul, freeing Callie and weakening Gozer’s physical form. They lure Gozer to the trap field, but it malfunctions and Gozer frees Zuul, who possesses Lucky and fully restores Gozer’s power. Ray and the other surviving original Ghostbusters, Peter Venkman and Winston Zeddemore, arrive to help, and Gozer, after having already killed Egon, seeks to complete their revenge against the quartet for vanquishing them.[c] Supported by Egon’s now-visible ghost, Phoebe fights Gozer with her proton pack. The Ghostbusters help Phoebe restrain Gozer by crossing their proton streams while Trevor uses his to charge the traps’ power source, allowing Callie to activate the ghost traps, capturing Gozer and their minions. Egon reconciles with his family and friends before departing for the hereafter.

Later, Peter is revealed to be married to Dana Barrett. Winston, having become a wealthy businessman since leaving the Ghostbusters, returns the Ecto-1 to the Ghostbusters’ firehouse. In the basement, a light on the ecto-containment unit flashes red.