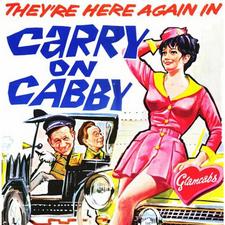 Charlie Hawkins (Sid James) is the workaholic owner of the thriving taxi company Speedee Taxis, but his wife Peggy (Hattie Jacques) feels neglected by him. When Charlie misses their fifteenth wedding anniversary, because he is out cabbing, she decides to punish him. Telling Charlie that she is going to ‘get a job’, she establishes a rival company, GlamCabs. The cars are brand new Ford Cortina Mk1s and driven by attractive girls in provocative uniforms. Flo, the wife of one of Charlie’s drivers, is appointed to the post of office manager.

Charlie continues to coach his mainly inept (and often ex-army) drivers, including the clumsy Terry “Pintpot” Tankard (Charles Hawtrey), whilst Peggy refuses to tell Charlie about her new job. Charlie feigns a lack of interest, but he is dying to know. As Charlie unsuccessfully struggles to cope with his wife’s absences and realises just what she had to endure, Peggy’s company becomes a thriving success due to the large number of male taxi passengers preferring to ogle her sexy drivers during journeys. Speedee rapidly starts losing money and faces bankruptcy. Peggy feels terrible for what she has done. Charlie and his drivers attempt to sabotage the rival company, but they are chased off.

In desperation, Charlie suggests a merger with his rivals but is furious to discover who the real owner is and storms off.

A month later, Peggy is living at the office and Charlie has turned to drinking, allowing his company to collapse around him. Peggy and Sally (Liz Fraser) are hijacked by bank robbers. Peggy manages to use the taxi radio to subtly reveal their situation and location. Charlie intercepts the broadcast and rallies the other Speedee drivers in pursuit. The robbers are cornered and captured.