On This Day April Hayley Atwell

On This Day September Jenna Ortega 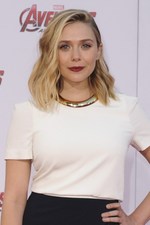 Elizabeth Olsen (born Elizabeth Chase Olsen; February 16, 1989), is an American actress. Her breakthrough came in 2011 when she starred in the independent thriller drama Martha Marcy May Marlene, for which she was nominated for the Critics’ Choice Movie Award for Best Actress and Independent Spirit Award for Best Female Lead, among other awards. She subsequently starred in the films Silent House (2011), Liberal Arts (2012), Oldboy (2013), Godzilla (2014), I Saw the Light (2015), Wind River (2017), and Ingrid Goes West (2017). In television, she executive produced and starred in the series Sorry for Your Loss (2018–2019), for which she was nominated for a Critics’ Choice Television Award.

Olsen gained worldwide recognition for her portrayal of Wanda Maximoff / Scarlet Witch in the Marvel Cinematic Universe media franchise. As part of the franchise, she has starred in the superhero films Avengers: Age of Ultron (2015), Captain America: Civil War (2016), Avengers: Infinity War (2018), and Avengers: Endgame (2019), as well as the miniseries WandaVision (2021).