Pompey began the new season by collecting a point from a dramatic League One contest with promotion favourites Sheffield Wednesday.

Marvin Johnson had fired the hosts into an early lead, but there was nothing else to shout about during a lethargic first half.

The game exploded into life after the break, though, with a glut of four goals in the space of just 14 minutes.

Connor Ogilvie nodded the Blues back on level terms, only for Fisayo Dele-Bashiru to immediately restore the Owls’ lead.

But the visitors did not let that deflate them, with Michael Jacobs and Colby Bishop netting in quick succession to turn the contest on its head.

Ultimately, however, they had to settle for a share of the spoils after an impressive equaliser from Dele-Bashiru.

Pompey then had strong shouts for a penalty turned down, while Lee Gregory was dismissed for Wednesday late on.

Marlon Pack was also named in the line-up, although he had already made a couple of first-team appearances during his first spell with Pompey.

Teenage Tottenham loanee Dane Scarlett, the latest player to arrive at Fratton Park, was included among the substitutes.

Regular skipper Clark Robertson missed out through injury, so the captain’s armband was worn by Sean Raggett.

The rain was falling in South Yorkshire and the spirits of the large army of travelling supporters were dampened soon after kick-off.

Josh Windass collected a fine threaded pass from Barry Bannan and his low delivery across the face of goal was not dealt with.

That allowed Johnson to collect the ball and rifle it into the roof of the net to give the home side the lead after just eight minutes.

There was little else to excite the sizable crowd for the rest of the half, with neither team able to register another shot on target.

Sheffield Wednesday enjoyed more of the possession but were unable to force Josh Griffiths into action.

The closest that Pompey came at the other end, meanwhile, was a long-range Ronan Curtis effort that was scuffed past the post.

And the away supporters also grew frustrated by a series of marginal calls from referee Sebastian Stockbridge that went in favour of the Owls.

The hosts looked to extend their advantage just before the break, but Dele-Bashiru was unable to find the target.

Sheffield Wednesday had a good opportunity once the action restarted, but nobody could get on the end of Jack Hunt’s drilled delivery into the box.

But the Blues had their first shot on target just a few moments later, as Jacobs cut along the edge of the box and curled the ball into the arms of David Stockdale.

And they were soon celebrating an equaliser when Pack stood the ball up for OGILVIE to guide home a fine header.

The joy was short-lived, however, as Dele-Bashiru collected the ball 30 yards out and hit a fierce effort that flew into the net.

But the second half was proving much livelier than the first and it was soon the away fans who were roaring.

Curtis and Pigott combined well on the right and the latter delivered a cross for Bishop that was tipped against the bar by Stockdale.

It might possibly have bounced down over the line, but JACOBS made sure by stooping to nod into the net.

An incredible start to the second half continued in the same vein just past the hour mark, as the Blues scored again to lead for the first time.

The Owls tried to respond and Rafferty somehow managed to divert Gregory’s effort over the crossbar.

Former Pompey defender Darren Moore then swapped one ex-Fratton player for another, bringing on Michael Smith for George Byers.

Cowley responded with a couple of changes of his own, as Pigott and Jacobs made way for Scarlett and Reeco Hackett.

Wednesday were on the attack and it took a fantastic block from Pigott to stop Michael Ihiekwe’s powerful header from crossing the line.

The hosts did level from the resulting corner, however, with the ball eventually falling to Dele-Bashiru, who hit an unstoppable rocket that almost burst the net.

Seven minutes of stoppage-time left both sets of fans sensing they could find a winning goal at the death.

And Scarlett was fuming not to have been awarded a penalty after being caught inside the box by Dominic Iorfa.

The Owls finished with 10 men after a foul from Gregory ensured he collected a second booking of the afternoon.

Curtis had a chance that was deflected off target, but ultimately both sides would begin the campaign with a point.

On This Day July Joey King 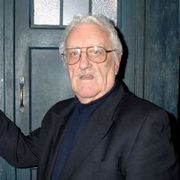 Doctor Who and Wombles actor Bernard Cribbins has died aged 93, his agent has confirmed.

During a career that spanned seven decades, Cribbins narrated the 1970s children’s programme The Wombles.

Cribbins returned to the show as Wilfred Mott, the grandad of Catherine Tate’s character Donna.

The actor was known by generations of children – he also played the station porter Albert Perks in 1970 film The Railway Children.

Pompey have signed Dane Scarlett on a season-long loan deal from Tottenham.

He scored twice against Serbia in the group stages and started the final, as the Three Lions – led by former Pompey coach Ian Foster – battled from behind to beat Israel after extra-time.

Scarlett has progressed through the Spurs academy and made his senior debut in a Europa League match against Ludogorets in November 2020.

At the age of 16 years and 247 days, he was the youngest player to have featured in a competitive fixture for the club.

Scarlett was then handed his Premier League bow against West Brom a few months later and has made a total of 10 appearances for the Londoners.

At the end of last season he put pen to paper on a new deal with Tottenham, keeping him at the club until 2026.

Alex Bass has left Pompey to sign for Sunderland for an undisclosed fee.

The 24-year-old goalkeeper made 41 senior appearances for the Blues, having progressed through the academy.

He made his debut in a narrow Carabao Cup defeat at Coventry in August 2016 before keeping a clean sheet on his victorious league debut against Peterborough a couple of years later.

Bass spent the second half of last season on loan at Bradford and previous had temporary spells with Salisbury, Torquay and Southend.

Everyone at Portsmouth Football Club would like to thank Alex for his contribution to the club and we wish him well for the future.

Pompey have completed the signing of experienced defender Michael Morrison.

The 34-year-old centre-back has put pen to paper on a one-year deal after leaving Reading at the end of last season.

Morrison spent three years at Reading, making 113 appearances for the Championship outfit – with 29 of them coming last season.

He has played in the second tier for Leicester, Charlton and Birmingham, while also winning the League One title with the two former clubs.

Morrison – who began his career with Cambridge – scored for the Foxes when they won a League Cup tie at Fratton Park in September 2010.

In 2011 he had a brief spell with Sheffield Wednesday, where Pompey begin their latest League One campaign on Saturday.

Sicily Rose is a model and actress who has been represented by Rocky Mountain Entertainment Agency and Henderson Represents Inc.

She has been a member of GoatFamLA. Sicily Rose is a social media star and she has a huge fan following on her Instagram profile.

On This Day July Meg Donnelly

On This Day July Summer Glau