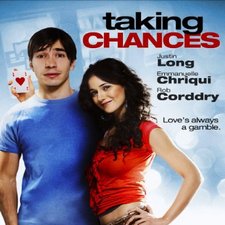 Chase Revere manages Patriotville’s history museum, the run-down town’s sole tourist attraction. Having inherited a love of history from his late mother, Chase happily devotes most of his free time to maintaining the museum’s exhibits, directing reenactments on the site of a Revolutionary War battle, and preparing a proposal to expand the museum. His friend Digs, who has devoted himself to having sex with as many high school girls as possible, is disgusted at this and wants Chase to join him on the dating scene.

A group of Native Americans arrive in town, taking up temporary residence in the hotel run by Chase’s father, to consider setting up a casino in Patriotville. They negotiate with the town government for a bribe by threatening to have the casino built in Sulfur Falls instead. Feeling the town needs the casino to keep from going bankrupt, the mayor resorts to taking $1,000,000 out of various town projects to fund the bribe.

Chase spots a girl, Lucy, trying to get into her father’s car. She sets the interior on fire and convinces Chase to give her a ride away from the scene before he realizes what’s happening. Lucy comes from Sulfur Falls and tracked her father to Patriotville after he abandoned Lucy and her mother for another woman. Though she claims to be after a family heirloom that her father took, Chase intuits that Lucy is obsessed with her father. Intrigued, he asks for her phone number.

Digs, whose father is on the town council, tells Chase about the casino deal. Chase is incensed even before learning that the proposed building site is the historical battlefield, believing that the casino will desecrate the town’s culture. Digs also advises against dating Lucy, since his cousin dated her and says she is resolutely chaste. Chase and Lucy’s first date seems to go well, but she firmly refuses his request for a kiss.

Chase and Lucy start a petition to put the casino issue to a vote. They meet opposition from both the government and the general citizenry, who seem convinced that the casino’s financial benefits outweigh the battlefield’s historical value. They tear up their fliers, call upon legal technicalities to shut down their protests, make threatening phone calls, vandalize their houses, print news articles describing them as communists, and fire Chase from the museum. Chase’s father is unsupportive, and seemingly pays no attention to anything Chase says. Chase and the Native Americans maintain their budding friendship, expressing mutual respect even in their disagreement.

The mayor’s wife confronts Chase and Lucy with a selfie of Lucy and the mayor having sex. A deflated Chase walks away in silence. Digs tries to stifle Chase’s hopes of reconciliation by psychoanalyzing Lucy, saying her affair with the mayor is undoubtedly part of a pattern of having sex with older men and breaking the hearts of would-be “saviors” like Chase in a subconscious act of revenge against her father.

The mayor’s wife tape records the mayor discussing the casino bribe and gives the tape to Lucy in retribution for his philandering. Lucy finds Chase and confesses that, much as Digs suspected, the mayor is the third married man in a position of authority who she had an affair with, but also says that she is giving up this behavior. They then have sex. She shows him the tape, and he tells her to bring it to a rally they have planned. An agent facilitating the casino deal is listening in and tells the mayor. He finds Lucy and offers to trade her father’s address for the tape. Lucy gives over the tape while Chase is humiliated at the rally outside, playing for time in hopes of Lucy arriving with the tape.

Chase finally realizes that Lucy does not really care about him, that the casino’s victory gave just about everyone in town what they wanted, and that he has a larger role in life than safeguarding Patriotville’s “minor league” history. The Native Americans depart from Patriotville after receiving the $1,000,000 bribe and giving Chase a new name, “Chase with Plenty Horses”, meaning he will go far. While cleaning their room, he finds actors’ makeup and a wanted poster which clue him in that the “Native Americans” are actually con men. They left him a car as a gift, which he packs with his belongings and drives out of town. After the revelation that Patriotville is not really getting a casino, the mayor and his cohorts are imprisoned for the abuse of town funds.

On This Day June Addison Timlin

Pompey have completed the signing of 28-year-old midfielder Ryan Tunnicliffe.

He has put pen to paper on a two-year deal – with the club holding an option for a further 12 months – after leaving Luton.

Tunnicliffe progressed through the ranks at Old Trafford and made a couple of senior appearances for the Red Devils.

He had several spells out on loan before signing for Fulham and briefly featuring for them in the Premier League.

Millwall was his next stop in the summer of 2017, with Tunnicliffe spending two years at The Den and then moving to Luton.

He made a total of 68 appearances in two years with the Hatters, helping to establish them in the second tier of English football.

Pompey have completed the signing of versatile midfielder Shaun Williams on a one-year deal.

The 34-year-old Republic of Ireland international officially becomes a Blues player when his Millwall contract expires at the end of the month.

Williams – who is also comfortable in defence – began his career in his homeland with Drogheda and Sporting Fingal, enjoying cup glory and Europa League football with the latter.

He moved to MK Dons in March 2011 and impressive displays during the 2012/13 campaign saw him named Player of the Year by both supporters and team-mates.

Williams then signed for Millwall at the start of 2014 and appeared at Wembley when they beat Bradford to win the 2016/17 League One play-off final.

He struck 22 goals in 295 appearances for the Lions, featuring 22 times in the Championship last term.

Williams has been capped three times by Republic of Ireland and netted in a 2018 Nations League clash with Wales.

James Bolton has left Pompey to sign for fellow League One club Plymouth for an undisclosed fee.

The 26-year-old right-back scored three goals in 53 appearances for the Blues after arriving from Shrewsbury in the summer of 2019.

One of those strikes was a dramatic late leveller in a 2-2 draw against his new club at Fratton Park last summer.

The Pilgrims – who are managed by Ryan Lowe – finished the 2020/21 third tier campaign in 18th position.

Everyone at Pompey would like to thank James for his service to the club and wish him all the best during his time in Devon.

Pompey have completed the signing of Scottish centre-back Clark Robertson on a two-year deal.

The 27-year-old will officially become a Blues player when his Rotherham contract expires at the end of the month.

Former Scotland under-21 international Robertson began his career with Aberdeen before moving south of the border to join Blackpool in 2015.

Robertson made more than a century of appearances during his time at Bloomfield Road and netted in a victory at Fratton Park.

He was part of the side that won the League Two play-off final in May 2017, playing the full 90 minutes of the Wembley success over Exeter.

Robertson signed for Rotherham in 2018 and helped them secure promotion to the Championship, scoring five goals in 69 games for the Millers.