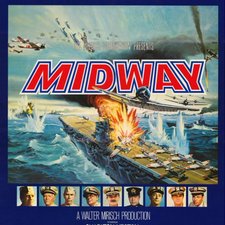 On April 18 1942 during World War II, a squadron of B-25 bombers from the USS Hornet launches a lightning raid on Tokyo. The strike stuns the Imperial Japanese Navy and its commander Admiral Yamamoto. With hard evidence of the threat posed by the carriers of the American Pacific Fleet to the Japanese home islands, Yamamoto devises a plan to lure out the American fleet and destroy it once and for all by forcing it to sortie against the invasion of Midway Island.

At Pearl Harbor, Captain Matt Garth is tasked with gauging the progress of decryption efforts at Station HYPO, headed by Commander Joseph Rochefort, which has partially cracked the Japanese Navy’s JN-25 code, indicating that a major operation will soon take place at a location the Japanese refer to as “AF”. Garth is also asked by his son, naval aviator Ensign Tom Garth, to help free his girlfriend Haruko Sakura, an American-born daughter of Japanese immigrants, who has been interned with her parents, by calling in favors to have the charges against the family dropped. Yamamoto and his staff present their plans for Midway to the commanders who have been chosen to lead the attack – Admirals Nagumo and Yamaguchi of the Japanese carrier force and Admiral Kondo of the invasion force.

After the inconclusive Battle of the Coral Sea, Rochefort uses a simple ruse to confirm that “AF” is Midway. Now knowing the location and roughly the date of the attack, Admiral Nimitz and his staff send the carriers USS Enterprise and USS Hornet, augmented by a hastily-repaired USS Yorktown that had been damaged at Coral Sea, to a point north of Midway and lie in wait for the Japanese fleet. Meanwhile, Matt has been unsuccessful in freeing the Sakuras, infuriating Tom.

The battle begins on June 4 as Nagumo’s carrier force launches its air attack on Midway Island. The American base is damaged but the airstrip remains usable, meaning Midway can still launch aircraft. The Japanese fleet is then spotted by scouts; the American carriers launch their planes in response. Meanwhile, Nagumo is shocked to learn of a sighting by a scout plane of the Yorktown, disrupting his plans for a second strike on Midway; he orders that his planes be rapidly re-armed with torpedoes for an attack on the American carrier.

Torpedo bombers from Hornet are the first American planes to locate the Japanese fleet. They attack without fighter protection and are slaughtered by the Japanese Combat Air Patrol. Tom is severely burned when gunfire starts a fire in his cockpit. The Japanese fighters, however, are drawn down to wave-top altitude by the low-flying torpedo planes, leaving them out of position when dive-bombers from Enterprise and Yorktown arrive. As the Japanese are preparing to launch their second wave, the American bombers attack and reduce three of the Japanese carriers – Akagi, Kaga and Sōryū – to burning wrecks within minutes.

The remaining Japanese carrier Hiryū immediately launches aircraft. Following the returning American bombers, they soon discover Yorktown and inflict severe damage. The crew manages to bring the fires under control as a scout plane reports that Hiryu has been spotted. Below decks, Matt meets Tom and reconciles with him. Due to a shortage of pilots, Matt joins the counterattack against Hiryu just before its second wave of aircraft strikes. Yorktown is soon burning and the order is given to abandon ship.

Hiryu is sunk, dealing a fatal blow to the invasion. The American planes return to Enterprise and Hornet but Matt, his plane badly damaged, is killed during landing. Yamamoto receives news of the loss of his carrier force. The admiral orders a general withdrawal as he contemplates how he will apologise for his failure to the Emperor.