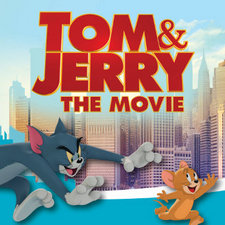 In Manhattan, Tom Cat, who dreams of becoming a pianist, plays in Central Park. While, his longtime rival, Jerry Mouse, is in search of a new home. After Tom’s keyboard is destroyed in a fight, he chases Jerry but bumps into a young woman named Kayla Forester, who loses her job as a result. Down on her luck, Kayla wants to prove her capabilities by looking for a position at New York’s fanciest hotel, the Royal Gate. Kayla presents a stolen resume as her own and is hired to help set up a high-profile wedding. While Kayla gets a tour of the hotel, Jerry takes refuge in the hotel where his regular shenanigans involve stealing food and items to ramp up his new lifestyle, and Tom comes up with various strategies to enter the hotel and pursue Jerry.

Local celebrities Preeta Mehta and her fiancé Ben are greeted as they arrive, along with their pets Spike and Toots, who are all unaware of Jerry stealing from Preeta’s handbag, with the exception of Spike. As the couple is escorted to their room, Jerry’s presence is revealed, which puts the wedding and the hotel at risk. Kayla offers to help catch Jerry, but fails and realizes that he won’t be easy to catch. After many failed attempts, Tom successfully enters the hotel, with him and Jerry ending up fighting and wrecking the whole hotel room. Kayla comes to check due to noise complaints and befriends Tom because of their same goal of catching Jerry, which has Tom hired by owner Mr. Dubros to exterminate Jerry. Tom and Kayla are threatened by their boss Terence to be fired, if Tom fails to catch Jerry.

After many failed attempts, Tom designs a big mouse trap and gets Jerry out of the hotel. Meanwhile, Kayla helps with the wedding plans and learns from Preeta that her engagement ring is missing. Jerry returns and reveals to Kayla that he had Preeta’s ring with him, and he agrees to give it back to her, if she lets him stay in the hotel. Before Kayla can agree, Terence returns from walking Spike, and tries to look into Jerry hiding in Kayla’s coat pocket, but ends up creating a huge scene to which Spike, Tom, and Jerry’s ensuing chase destroys the hotel lobby.

Terence is put on leave, while Kayla takes over as event manager for returning the ring stolen by Jerry. Kayla tells Tom and Jerry that, if they want to stay in the hotel, the pair will have to get along and spend the whole next day far away from the hotel together, to which they agree. While Kayla takes care of the hotel and manages the wedding with the crew, Tom and Jerry bond during their trip, but are taken to a pet compound after they inadvertently disrupt a baseball game. A vengeful Terence separately visits Tom and Jerry and tells lies of what the pair said to each other behind their backs, which angers them and incites them to fight at the wedding, resulting in the wedding and the rest of the hotel getting destroyed.

After Kayla admits her deception and leaves in shame while Preeta renounces the wedding, a remorseful Tom and Jerry reconcile with each other. They convince Kayla and the hotel crew, which includes a reluctant Terence, to salvage the wedding, to make up for the hotel being destroyed by their cat-and-mouse battle. The wedding is held at Central Park, where Kayla apologizes to Preeta about the chaos and promises that Tom and Jerry have changed their ways. Ben also apologizes to Preeta because of the extensive expenses, in light of impressing her dad. Kayla and the woman whose resume she had taken from reconcile with each other and get jobs at the hotel, and Tom also gets one as the hotel’s pianist. Tom plays the piano for Toots, with Jerry joining the party, until a mishap causes them to revert to their old habits.