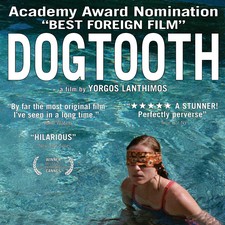 A couple, their adult son and two adult daughters live in a fenced-in compound. The children have no knowledge of the outside world; their parents say they will be ready to leave once they lose a dogtooth, and that one can only leave safely by car. The children entertain themselves with endurance games, such as keeping a finger in hot water. They believe they have a brother on the other side of the fence to whom they throw supplies or stones. The parents reward good behaviour with stickers and punish bad behaviour with violence.

The father visits a dog training facility and demands to have his dog returned. The trainer refuses because the dog has not finished its training, and asks: “Do we want an animal or a friend?”

When the children are terrified by a stray cat in the garden, the son kills it with a pair of pruning shears. Deciding to take advantage of the incident, the father shreds his clothes, covers himself in fake blood, and tells his children that their unseen brother was killed by a cat, the most dangerous creature. After he teaches them to bark on all fours to fend off cats, the family holds a memorial service for the brother.

Christina again barters for oral sex from the elder daughter. The daughter rejects her offer of hair gel and demands the Hollywood film tapes in her bag. She watches the films in secret and afterwards recreates scenes and quotes their dialogue. When the father discovers the tapes, he beats her with one of them, then goes to Christina’s flat and hits her with her VCR, cursing her future children to be corrupted by “bad influences”.

The parents decide that, with Christina no longer available, they will have the son choose one of his sisters as a new sexual partner. After fondling both sisters with his eyes closed, he chooses the elder. She is uncomfortable during their sex and afterwards recites threatening dialogue from the Hollywood film to her brother.

During a dance performance for the parents’ wedding anniversary, the younger daughter stops to rest, but the elder continues and dances the choreography from the film Flashdance, disturbing her parents. That night, she knocks out one of her dogteeth with a dumbbell and hides in the boot of her father’s car. The father discovers her tooth fragments and searches for her fruitlessly. He drives to work the next day; the car sits outside the factory, unattended.