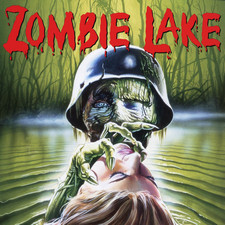 The story opens in a small French village 20 years after World War II. The villagers refer to a small nearby lake known as the “lake of the damned.” A group of young women go skinnydipping in the lake and are attacked by zombie Nazi soldiers who drown them. The zombies later leave the lake and attack women within the town. The mayor of the town (Howard Vernon) refuses to take action against the zombie attacks until reporter Katya Moore (Marcia Sharif) arrives to investigate.

After Moore returns a book to the mayor, they discuss the history of the town during the German occupation. His story is about a young Nazi soldier who protected a local woman from enemy gunfire. He was nursed back to health by the woman, who offered him her pendant and had sex with him. Returning to the woman later, the soldier found her dying after giving birth to their daughter Helena. The soldier and his entire platoon were then murdered by a group of townspeople led by the mayor, and their bodies disposed of in the lake.

The mayor says that he believes the zombies are the soldiers returning from the dead. Later, a female basketball team visiting the town is attacked by the zombies. Given the scale of the tragedy, the mayor calls the police, who send two detectives over to investigate. They too are killed by the zombies. The mayor then devises a plan to use the zombie’s relationship with Helena by having her lure them into a mill. The zombies enter the mill, which is then destroyed by the villagers using flamethrowers.