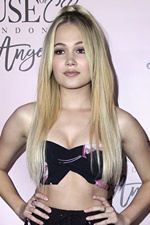 She is known for portraying Bree Davenport in the Disney XD series Lab Rats, and its spinoff Lab Rats: Elite Force. In 2014 she starred in the Disney Channel Original Movie How to Build a Better Boy, where she portrays Mae Hartley. Berglund starred as Carly Carson in the 2019 Starz television drama series Now Apocalypse.

She has also played the lead in two sports-themed films set in Australia, 2016’s Raising the Bar and 2018’s Going for Gold.