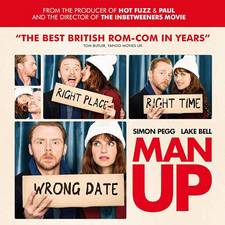 Nancy is a 34-year old journalist who has been dating unsuccessfully for the past four years. Her sister encourages her to keep putting herself out there. Nancy goes to her friend’s engagement party and has an awkward blind date. She then travels to London to attend her parents’ 40th anniversary celebration. On the train, she sits across from Jessica, a bubbly younger woman who is going on a blind date based on a book called Six Billion People and You. While talking to Jessica, Nancy expresses her pessimism about life and love. Jessica walks off the train at London Waterloo station, leaving behind her book. Nancy pursues Jessica to return it but is stopped by Jack, Jessica’s blind date. Jack thinks Nancy is Jessica because of the book. Before Nancy can explain the situation, Jack charms her with his rambling introduction. She impulsively pretends to be Jessica.

Despite the fact that Nancy is not who she says she is, the two hit it off immediately. They talk and get to know each other, and Nancy learns that Jack is a 40-year old divorced man who is an online marketing manager. They have a good time while drinking and bowling. Then, Nancy runs into her secondary school classmate and stalker, Sean, who works at the bowling alley. He finds out about Nancy’s deception and tries to blackmail her into kissing him in a bathroom stall. The two are caught in a compromising position by Jack, and Nancy admits that she is not actually his date. Jack and Nancy get into an argument, criticising each other’s opinions and life choices.

After realising that they have lost Jack’s bag and Nancy’s notebook, they both race back to the bar. There, they meet Ed and Hilary, Jack’s soon-to-be-ex-wife. Trying to irritate Hilary, Jack pretends that Nancy is his girlfriend, and Nancy goes along with it. She learns that Ed and Hilary had an affair, which led to the divorce. Jack gets upset and goes to a bathroom stall. Nancy joins him, and he tearfully admits that he has not recovered from his failed marriage. Nancy says that her own bad relationship history has made her bitter. She consoles Jack and says that he will eventually be all right. They go back to the bar, and Nancy sets Ed on fire before spraying Ed and Hilary with a fire extinguisher, to Jack’s delight.

Nancy decides to go to her parents’ anniversary party, which is already underway. She is about to invite Jack, but he learns that Jessica still wants to meet him, so they part ways. Nancy arrives at her parents’ party but is sad about leaving Jack. During his date with Jessica, Jack finds that they do not have much in common, and he realises that leaving Nancy was a mistake. With Jessica’s blessing, he goes to find Nancy. He enlists the help of Sean, but Sean sends Jack to the wrong address and goes to try his luck with Nancy himself, to no avail. Jack ends up at a party of teenagers, but one of the teenagers knows where Nancy’s parents live, and they all go there. Nancy gives a speech at the anniversary party about how her date with Jack changed her for the better. Then, Jack arrives. He tells Nancy that he wants to be with her, and they kiss.