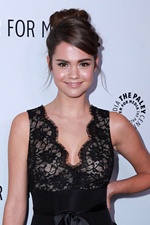 She is known for her roles as Brittany Flune in the children’s television series Mortified for the Nine Network, and as Natasha Ham in the Seven Network’s teen drama Trapped.

For American audiences, since 2013, she has played the role of Callie Adams Foster in the Freeform drama The Fosters (2013–2018) and its sequel series Good Trouble. She also co-starred with Ross Lynch in the Disney Channel original films Teen Beach Movie (2013) and Teen Beach 2 (2015) as McKenzie.