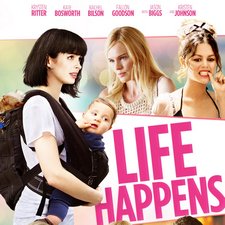 Deena (Kate Bosworth) and Kim (Krysten Ritter) each bring home a guy one night. Realizing they have no condoms, they go looking around in their house where Kim ultimately finds the last one, but Deena takes it and Kim has unprotected sex. One year later, Kim is a single mother. She still lives with her two girlfriends, Deena and Laura (Rachel Bilson), while trying to juggle her son named Max. She takes Max to his father Mark (Coiro), but he announces that he is not interested in being a father. Kim brings Max along to work with her one day, as a dog service company assistant to her youth-obsessed boss Francesca (Kristen Johnston). Francesca reprimands Kim for bringing Max with her and says that she would be fired if she does it again. Kim then takes Max to her grandfather (Seymour Cassel) who is currently living in a retirement home.

Meanwhile, Deena tries to finish writing her book in a library and ends up hooking up with a guy. One night, as Kim works as a bouncer at one of Francesca’s parties, she falls for a guy named Nicolas (Geoff Stults) who was with two of his friends, Henri (Justin Kirk) and Sergei (Jason Biggs), attending the party. That night, Francesca finally allows Kim to have a break and meet up with Nicolas who promised to buy her a drink earlier and they spend the night getting to know each other. They quickly form a relationship after Nicolas intently asks Francesca to have Kim take his dog in his house. Kim brings along Max with her yet again where she lies to Nicolas that Max is a child of one of her roommates and that she was just relied on to look after Max. Kim asks Deena to come with her on her date with Nicolas that evening and Deena agrees. Nicholas arrives along with his friend Henri, and they look to Deena as her roommate with the baby. Kim begs Deena to just go with the lie they have come up with and Deena responds that it wouldn’t take long enough for them to know that Kim is the one with a baby. They have a double date where it seems that Deena and Henri are attracted to each other, although Henri dresses up in hippie clothing.

The next day, Deena seems promoted from her career as a writer when someone could recognize her from an article she wrote. Kim on the other hand seems to be an underdog as Francesca wouldn’t allow investing in her own dog service business. Laura, the other roommate seems to be unstable as she has been shifting jobs every week. Kim asks her to take care of Max since she has a date with Nicholas that night but tells her she can’t. She then freaks out and calls Deena who isn’t answering her calls. Finally, she asks a young boy to babysit Max for her. Nicolas and Kim have sex after their romantic date, but it is not long before Nicolas discovers Kim’s secret when milk leaks out of her breasts. This leaves Nicholas upset and Kim leaves.

On her way home, she sees a paramedic leave and asks Deena what happened. Kim yells at Deena for not returning home early and Deena strikes back at her saying that Max is her responsibility and there is nothing that could excuse her behaviour. Deena and Kim’s friendship is compromised. Kim spends all day around the house and finally quits her job telling Francesca she never looked 21. The next day, Kim informs Deena that she has to move out of the house and focus her life on being a mother and as for Deena, her successful career. Kim buys a house and visits Mark who regrets everything he said about not being ready and he wants a shot of being a dad for once. Laura then enters a show competition and seems to be successful. Kim finally reconciles with Deena and Nicolas and they all play pool together.