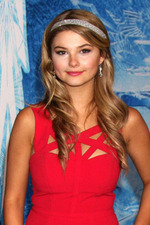 She is known for her roles as Quinn Brenner in the film Insidious: Chapter 3, Dana Tressler in the film Flipped, for which she won a 2011 Young Artist Award, and Lexi Reed on Disney Channel’s A.N.T. Farm.

Scott’s discography has consisted of her EP New Girl in Town (2009) some Disney Channel promotional singles, released between 2008 and 2012, and the 2015 movie soundtrack album from her role in Jem and the Holograms.