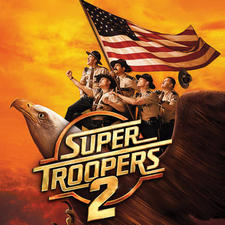 Cannot remember much of the first film but if anything like this then I need to re-watch it soon.

Several years after the first film, the officers have been fired from the Spurbury Police Department after taking Fred Savage on a ride-along that resulted in his death. Farva (Heffernan) is now a construction supervisor, with Mac (Lemme) and Rabbit (Stolhanske) working for him. Thorny (Chandrasekhar) works in logging, and Foster (Soter) is living with his girlfriend and former coworker, Spurbury Police Chief Ursula Hanson (Coughlan). Mac receives a call from his former boss, Captain O’Hagen (Cox), to gather the group and meet for a fishing trip in Canada.
Once the group arrives, they find that O’Hagen’s intention had been for them to have a meeting with Vermont Governor Jessman (Carter). She explains that during a recent land survey, it was discovered that land in Canada was originally designated for the US. Canada has agreed to hand over the land, and Gov. Jessman needs to set up a police department to take over from the Royal Canadian Mounted Police in the region. She invites the group to become state troopers again, with the promise that they will become full-time officers should they succeed at this task.

At a reception for the police officers, they meet the town mayor, Guy Le Franc (Lowe), the Canadian Mounties they’ll be replacing (Labine, MacArthur, and Sasso), and cultural attaché, Genevieve Aubois (Chriqui). The Americans are received poorly by the townspeople, who wish to remain Canadian. The next day, Foster and Mac accompany the Mounties on their patrol to meet the local townspeople, where they are attacked in Le Franc’s strip club. Thorny and Rabbit are tasked with replacing metric road signs with their U.S.-equivalent measurements, and Farva is assigned as the dispatcher.

Thorny and Rabbit encounter several young children under the influence of drugs. They ask the kids to lead them to where they found the drugs, and arrive at an abandoned lake house where they encounter unmarked pills and counterfeit cell phones. The next day, the Canadian Mounties play a prank on the Vermont State Troopers by releasing a bear into their station. In retaliation, the State Troopers kidnap the Mounties and release them in the woods. They then don Mountie uniforms, and attempt to discredit their Canadian counterparts by performing pranks on the people they pull over. However, their pranks are cut short when Le Franc reveals that he will use the serious crime of impersonating an officer to keep the territory from becoming American.

The State Troopers, realizing that they will not be given their original jobs after failing at this task, intend to return to America. During a botched highway stop, Farva and Mac encounter another cache of drugs and cell phones, as well as AK-48 rifles. The troopers realize that these items are all more valuable in the U.S. than in Canada, and that someone has been planting these items around the town in preparation for the turnover to the U.S, to avoid having to cross the border. Back at the station, Genevieve, who has been flirting with Rabbit, arrives, and the two begin to have sex, only to be attacked and carried-off. The rest of the State Troopers learn about Rabbit’s kidnapping by reviewing his dash-cam, and suspect the Canadian Mounties are involved.

Using a cell-phone triangulator on the counterfeit phones, the State Troopers arrive at a sawmill. They encounter the Mounties, only to realize the Mounties had suspected the State Troopers as the drug smugglers. Guy Le Franc reveals himself as the leader of the smuggling operation, and has captured Genevieve and Rabbit and tied them to a board placed on the saw. Genevieve reveals herself to be a double-agent working for Le Franc, and the groups engage in a shootout. The State Troopers and Mounties are successful, and Rabbit is rescued. Le Franc and his employees are arrested, and Genevieve reveals that she is actually Andrea Spooner, and part of the Ontario Provincial Police and is working undercover.

Gov. Jessman arrives to congratulate the officers in their success. At a press conference, the Canadian Mounties congratulate their American counterparts, and give praise for their efforts. Gov. Jessman announces that, due to the hidden contraband, the territory will remain in Canadian control for the time being, causing both nations’ officers to insult each other and begin brawling once again.

In a mid-credits scene, body-cam footage is shown from the ill-fated ride along with Fred Savage. The police officers have been called to rescue a cat out of a tree. After Fred Savage learns that their job entails them calling the fire department for the rescue, he begins climbing the tree to rescue the cat himself. He falls out of the tree and manages to land safely, only to be hit and killed by the arriving firetruck.

In a post-credits scene, Farva blends his pinky toe into a smoothie and drinks it straight out of the blender, the result of losing a bet with Rabbit during the movie.