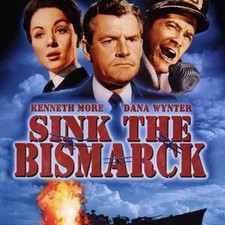 One of the all time classic war movies an a fair account of the real events.

The story begins with a clip of actual German newsreel footage from 14 February 1939, when Nazi Germany’s largest and most powerful battleship, Bismarck, is launched in a ceremony at Hamburg with Adolf Hitler in attendance. The launching of the hull is the beginning of a new era of German sea power.
Two years later, in 1941, British convoys are being ravaged by U-boats and surface raider attacks that threaten to cut the supply lines essential for Britain’s ability to continue the war. In May, British naval intelligence discovers Bismarck and the heavy cruiser Prinz Eugen are about to break out of the Baltic and into the North Atlantic to attack Allied convoys.

Meanwhile, a spy in German-occupied Norway, while perched on a ledge, spots Bismarck and its escort Prinz Eugen at anchor in Grimstadfjord. He attempts to alert the British Admiralty by radio, but he is discovered by a German patrol and is shot. The spy, still alive, attempts to message the Admiralty but is only able to transmit that one of the ships is Prinz Eugen; he is killed before he can complete the identity of the second ship, which was Bismarck.

The man assigned to coordinate the hunt is the Admiralty’s chief of operations, Captain Jonathan Shepard (Kenneth More), who has been distraught over the death of his wife in an air raid and the sinking of his ship by a German cruiser, commanded by Fleet Admiral Günther Lütjens (Karel Štěpánek). Upon receiving his new post, Shepard discovers Lütjens is the fleet commander on Bismarck. Shepard’s experience of conflict with Nazi Germany’s Kriegsmarine and his understanding of Lütjens allow him to predict Bismarck’s movements. Shepard acts coldly to his staff but comes increasingly to rely on the coolness and skill of his assistant, WRNS Second Officer Anne Davis (Dana Wynter).

Lütjens is also bitter. After the First World War, he considered that he had received no recognition for his efforts in the war. Lütjens promises the captain of Bismarck, Ernst Lindemann (Carl Möhner), that this time, he and Germany will be remembered as the victors.

Next morning, in the Denmark Strait Bismarck and Prinz Eugen encounter HMS Hood and HMS Prince of Wales. The four warships engage in a gun duel, and a shell from Bismarck hits Hood, slightly damaging her. Bismarck‍ fires another salvo from her main battery and both sides watch as three shells hit the water near the Hood. The fourth hits the vessel just below its main mast, penetrating through the thin deck armour; suddenly the ship’s deck simultaneously disintegrates and explodes in a massive fireball, even blowing one of the turrets off into the ocean. Both sides are shocked and horrified at the devastation, as Hood’s remains are enveloped by smoke. The captain of Prince of Wales, John Leach orders the yeoman to send a message to Admiralty saying that Hood has blown up. Now Prince of Wales is alone and is fired on by the two German ships. The battleship fires back and manages to hit Bismarck on the bow. Bismarck fires back and hits Prince of Wales on the bridge, destroying it and leaving only two men alive. Prince of Wales is hit multiple times before it makes smoke and retreats behind it. Only one gun is left firing as Prince of Wales retreats.

Bismarck and Prinz Eugen’s escape is shadowed by the cruisers HMS Suffolk and HMS Norfolk using radar. Later, Prinz Eugen breaks away and heads toward the port of Brest, in occupied France, while Bismarck turns around and fires at the British cruisers to provide cover as it escapes. The attack forces the cruisers to retreat. An attack by aircraft from the carrier HMS Victorious causes damage to the fuel tanks but otherwise Bismarck is still largely undamaged. Meanwhile, Shepard, obsessed with the German battleship, acknowledges that his son, an air-gunner on a Fairey Swordfish torpedo bomber from HMS Ark Royal, one of the British ships deployed to the hunt, may die when the British aircraft attack Bismarck. Shepard gambles that Lütjens is returning to friendly waters where U-boats and air cover will make it impossible to attack, so he plans to intercept and attack Bismarck before it reaches safety.

Shepard commits large forces stripped from convoy escort and uses Catalina flying boats to search for the German battleship. His hunch proves correct, and Bismarck is located, apparently steaming towards the French coast. British forces have a narrow window to destroy or slow their prey before German support and their own diminishing fuel supplies preclude further attacks. Swordfish torpedo planes from HMS Ark Royal have two chances. The first fails. The pilots misidentify HMS Sheffield as Bismarck, and their new magnetic torpedo detonators are faulty, with most exploding as soon as they hit the sea. Returning to the carrier and changing to conventional contact exploders, the second attack is successful. One torpedo hits Bismarck amidships causing minor damage; but a catastrophic second hit detonates near the stern, jamming the German battleship’s rudder and drastically slowing her down.

Unable to repair its rudder, Bismarck steams in circles. During the night the German battleship is attacked by two British destroyers. They fire torpedoes, and one torpedo hits, but Bismarck returns fire, sinking the destroyer HMS Solent.[Note 2] The main force of British ships (including battleships HMS Rodney and HMS King George V) find Bismarck the next day and rain shells upon her. Lütjens in his final moments insists to Lindemann that German forces will arrive to save them, but dies when a shell destroys Bismarck’s bridge. Shortly afterwards the remaining bridge officers are killed. After that, the remaining officers abandon their sinking ship. On board King George V, Admiral Tovey orders the newly joined cruiser HMS Dorsetshire to finish off Bismarck. The cruiser fires a salvo of six torpedoes at the severely damaged German battleship. Four torpedoes strike home, causing the vessel to sink faster than the crew can escape. The captain in King George V lowers his head as Bismarck rolls over and disappears beneath the waves. The admiral orders Dorsetshire to pick up any remaining survivors, finally saying tersely: “Well, gentlemen, let’s go home.”

After the sinking of Bismarck, and having been told that his son has been rescued, Shepard asks Davis out for dinner, believing it to be nine o’clock at night, only to realise it is nine in the morning after stepping outside and seeing the sky. Davis instead suggests breakfast, as they walk off together.