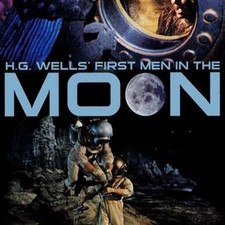 First Men In The Moon

One of the old sci-fi movies I remember more fondly than it probably deserves. Entertaining but no classic.

In 1964, the United Nations has launched a rocket flight to the Moon. A multi-national group of astronauts in the UN spacecraft land, believing themselves to be the first lunar explorers. However, they discover a Union Jack flag on the surface and a note mentioning Katherine Callender, which claims the Moon for Queen Victoria.

Attempting to trace Callender in the records office in Dymchurch in Kent, south-east England, the UN authorities discover that she has died, but that her husband Arnold Bedford is still living in a nursing home known as “The Limes”. The home’s staff do not let him watch television reports of the Moon expedition because, according to the matron, it “excites him”. Bedford’s repeated lunar claims are dismissed as senile delusion. The UN representatives question him about the Moon, and he tells them his story, which is then shown in flashback.

In 1899, Arnold Bedford lives in a romantic spot, Cherry Cottage, next to a canal lock in Dymchurch. His fiancée, Katherine Callender, known as Kate, arrives by car (driving herself) visiting the house for the first time. It is implied that Bedford is in financial difficulties as he has a letter for rent arrears. They meet a nearby neighbour, inventor Joseph Cavor, who wants to buy the cottage, in case his experiments damage the cottage. Kate agrees this on Bedfords behalf. Bedford starts spending much time at Cavor’s house, where he has a large laboratory. There he has invented Cavorite, a substance that will let anything it is applied to or made of deflect the force of gravity. He plans to use it to travel to the Moon. Bedford gets deeds signed up in Kath’s name selling the cottage to Cavor in exchange for £5000…. it must be remembered that he is selling something he does not own!

Cavor tempts Bedford into his scheme by telling him there are nuggets of gold on the moon. He has already built a spherical spaceship in the greenhouse next to the cottage. The sphere is lined inside in green velvet and has electric lights. There is an explosion at Cavor’s house just as Kate arrives at the cottage. This is caused by Cavors assistant, Gibbs, going to the pub instead of watching the boiler. He shows her deep sea diving suits intended to keep them alive on the moon. The production of Cavorite is increased. Kate brings things for the trip: gin and bitters, chickens and an elephant gun. But she gives Bedford an ultimatum: Cavorite or me. Back at the cottage Kate is served with a summons by a bailiff accompanied by a silent policeman, charged with selling a property she does not own. Bedford and Cavor are just about to leave when Kate angrily hammers on the outside wanting to know what he has done. They pull her inside as the sphere launches.

On the long journey they eat only sardines. It is not explained how they steer, but opening a blind causes the sphere to instead head for the sun. They crash land on the moon. The men don the diving suits and Kate is put in the air-tight compartment.

While exploring the lunar surface, Bedford and Cavor fall down a vertical shaft, where there is breathable air and discover an insectoid population, the Selenites, living beneath the surface. (Cavor coins this name for the creatures after the Greek goddess of the Moon, Selene). Bedford attacks a group of Selenites out of fear, killing several, despite Cavor’s horrified protests. After escaping from them, the two men discover that their sphere, still containing Kate, has been dragged into the underground city.

They are then attacked by a giant caterpillar-like “Moon Bull” which pursues them until the Selenites are able to dispatch it with their rayguns. Cavor and Bedford see the city’s power station, a perpetual motion machine powered by sunlight. The Selenites quickly learn English and interrogate Cavor, who believes they wish to exchange scientific knowledge. Cavor has a discussion with the “Grand Lunar”, the ruling entity of the Selenites. Bedford makes the assumption that Cavor, and presumably all humanity, is actually on trial, and attempts to kill the Grand Lunar with an elephant gun but fails due to Cavor’s interference. Running for their lives, Bedford manages to find their sphere, and he and Kate escape; Cavor voluntarily stays on the Moon.

Bedford flies the sphere up a vertical light shaft, shattering the window-like covering at the top, and returns to Earth. He concludes his story by mentioning that they came down in the sea off Zanzibar, and their sphere sank without trace, while he and Kate managed to swim ashore. Cavor’s ultimate fate remained unknown to them.

In the present, Bedford, the UN party and newspaper reporters watch on television the latest events on the Moon, where the UN astronauts have broken into the Selenite city and find it deserted and decaying. The ruined city starts to crumble and collapse, forcing the astronauts to retreat hastily. Seconds later the city is completely destroyed. Bedford realizes that the Selenites must have succumbed to Cavor’s common cold virus to which they had no immunity