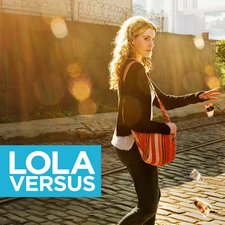 Normally the type of neurotic rom-com I go for big time but this just lacks the charm of many.

On her 29th birthday, Ph.D. student Lola accepts a marriage proposal from her longtime artist boyfriend, Luke, and wedding preparations soon unfold. However, weeks before the wedding, Luke gets cold feet and ends the engagement, leaving her devastated. In an attempt to encourage Lola to date other men, her best friend Alice takes her to a nightclub. There, the thought of having one-night stands with strangers sends Lola into a panic attack. Shortly thereafter, Lola visits Henry, a mutual friend of hers and Luke’s, spending the night at his place.

One day, a man named Nick flirts with Lola outside a fish market. Though she is not ready to start dating again, she agrees to give him her phone number. On her way to a meeting at university, Lola is surprised by Luke, who has been second-guessing his decision to cancel the wedding, but she dismisses him. Lola presents her doctoral dissertation on silence in 19th-century French literature and the lack thereof in modern popular culture, as her professors look on in confusion.

One night, Lola asks Henry to stay over at her place. The two share her bed and eventually kiss, until Henry stops out of respect for Luke. Despite confessing he has always had feelings for Lola, Henry reckons they should take things slow. The next day, Lola meets Luke for lunch. After they have sex at Luke’s apartment, Lola breaks down in tears and insists she can no longer see him, as she is still heartbroken. While Luke is in the shower, Lola sees text messages from a woman named Peggy on his phone.

Lola and Henry continue to spend time together. While watching Henry perform with his band one night, Lola runs into Luke and Peggy. Outside the venue, Luke tells Lola he has recently started a casual relationship with Peggy. Angry, Lola reminds him that he was the one that wanted time alone, before abruptly revealing she is dating Henry. Back inside, Luke, feeling betrayed, lashes out at both Lola and Henry. Later that night, a drunken Lola goes over to Henry’s, where they have awkward sex. Afterwards, Henry asserts they do not need to label their relationship.

Lola meets Nick for a dinner date at his place. They later have sex, during which Nick behaves oddly. The next morning, Nick accompanies Lola home. Henry, who had been waiting for Lola on her doorstep, becomes upset upon seeing her with Nick. Lola attempts to apologize to Henry, saying she was unsure if their relationship was exclusive, but he angrily walks out on her. Lola stops by Luke’s apartment; the two hang out and smoke weed.

At a house party thrown by Lola, Henry assures her that he is no longer upset with her, while Luke tells her that Henry will move in with him and invites her to their upcoming housewarming party. Later on, Lola breaks up with Nick. At the housewarming party, Alice and Henry awkwardly reveal to Lola that they have recently started dating. A hysterical Lola berates Alice for not telling her earlier. When Luke chimes in, Lola insists that all three of them have abandoned her, before storming off. Wandering the streets at night, Lola goes on a drunken bender, stealing liquor bottles and going to a strip club. The next morning, she awakens outside her apartment.

As she realizes she is the only one responsible for her existential crisis, Lola takes time to focus on her own self-improvement, and successfully completes her dissertation. Having made peace with both Alice and Henry, Lola celebrates her 30th birthday with a picnic in the park, surrounded by her parents and close friends. When Luke shows up, he tells Lola that their time apart has helped him realize how much he missed her, and proposes a reconciliation. Lola kindly rejects his offer, explaining that since she spent all that time obsessing about him, she still needs to be alone for a while.