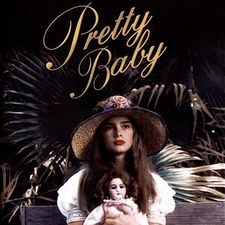 In 1917, during the last months of legal prostitution in Storyville, the red-light district of New Orleans, Louisiana, Hattie is a prostitute working at an elegant brothel run by the elderly, cocaine-sniffing Madame Nell. Hattie has given birth to a baby boy and has a 12-year-old daughter, Violet, who lives in the house. When photographer Ernest J. Bellocq comes with his camera, Hattie and Violet are the only people awake. He asks to be allowed to take photographs of the women. Madame Nell agrees only after he offers to pay.

Bellocq becomes a fixture in the brothel, photographing the prostitutes, mostly Hattie. His activities fascinate Violet, though she believes he is falling in love with her mother, which makes her jealous. Violet is a restless child, frustrated by the long, precise process Bellocq must go through to pose and take pictures.

Nell decides that Violet is old enough for her virginity to be auctioned off. After a bidding war among regulars, Violet is bought by an apparently quiet customer. This depiction of the child abuse experience is unpleasant. Hattie, meanwhile, aspires to escape prostitution. She marries a customer and leaves for St. Louis without her daughter, whom her husband believes to be her sister. Hattie promises to return for Violet, once she’s settled and has broken the news to the new spouse.

Violet runs away from the brothel after being punished for some hijinks. She appears on Bellocq’s doorstep and asks him if he will sleep with her and take care of her. He initially says no, but then he takes her in and commences having a sexual relationship with the child. In many ways, their relationship resembles one between a parent and child, with Bellocq standing in for Violet’s absent mother. Bellocq even buys Violet a doll, telling her that “every child should have a doll”. Bellocq is entranced by Violet’s beauty, youth, and photogenic face. She is frustrated by Bellocq’s devotion to his photography and lack of care for her as a dependent, as much as he is frustrated by the reality that she is a child.

Violet eventually returns to Nell’s after quarrelling with Bellocq, but social reform groups are forcing the brothels of Storyville to close. Bellocq arrives to wed Violet, ostensibly to protect her from the larger world.

Two weeks after the wedding, Hattie and her husband arrive from St. Louis to collect Violet, claiming that her marriage is illegal without their consent. Bellocq does not want to let Violet go. Violet asks if he will go with her and her family. Upon hearing that she does in fact want to go with them, he lets her leave without him, realizing that schooling and a more conventional life will benefit her greatly.