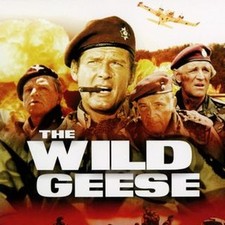 Allen Faulkner, a former British Army colonel turned mercenary, arrives in London to meet merchant banker Sir Edward Matheson. The latter proposes an operation to rescue Julius Limbani, the imprisoned President of a southern African nation who is due for execution by General Ndofa. President Limbani is held in a remote prison in Zembala, guarded by a regiment of General Ndofa’s troops known as the “Simbas”.

Faulkner accepts the assignment and begins recruiting forty-nine mercenaries, including officers he had worked with previously: Capt. Rafer Janders, a skilled tactician, and Lt. Shawn Fynn, a former Irish Guards officer and pilot. Fynn also brings in Pieter Coetzee, a former soldier in the South African Defence Force who wishes only to return home and buy a farm. The mercenaries fly to Swaziland, where they are whipped into shape. Before the operation begins, Janders exacts a promise from Faulkner to watch over his only son, Emile, should he not survive.

Because of an unexpected development, Faulkner is given only a day’s notice to launch the mission. On Christmas Day, the 50-man mercenary group parachute into Zembala via HALO jump. One group rescues an alive, though sick, Limbani from a heavily guarded prison, while another group takes over a small, nearby airfield to await pickup. Back in London, however, Matheson cancels the extraction flight at the last moment, having secured copper mining assets from General Ndofa in exchange for President Limbani. Stranded deep in hostile territory, the abandoned mercenaries fight their way through bush country, pursued by the Simbas. Many men, including Coetzee, are killed along the way.

The mercenaries make their way to Limbani’s home village, hoping to start a rebellion, but discover his people are too ill-equipped to fight. An Irish missionary living there informs the group of an old Douglas Dakota transport aircraft nearby that they can use to escape. As the Simbas close in, the mercenaries hold them off in a climactic battle sequence while Fynn starts the Dakota’s engines, suffering heavy casualties. Janders is shot in the leg and unable to board the departing airplane. Faulkner is forced to kill him, sparing him from capture and torture. The thirteen surviving mercenaries finally manage to land at Kariba Airport, Rhodesia, but Limbani dies from a gunshot wound sustained during the escape.

Some months later, Faulkner returns to London and breaks into Matheson’s home, forcing him to disgorge the cash in his wall safe—half a million dollars—to compensate the survivors and the families of those who died. Faulkner then kills Matheson and makes a swift getaway with Fynn. Faulkner fulfills his promise to Janders by visiting Emile at his boarding school.