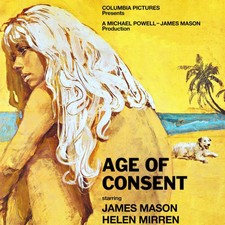 Bradley Morahan (James Mason) is an Australian artist who feels he has become jaded by success and life in New York City. He decides that he needs to regain the edge he had as a young artist and returns to Australia.

He sets up in a shack on the shore of a small, sparsely inhabited island on the Great Barrier Reef. There he meets young Cora Ryan (Helen Mirren), who has grown up wild, with her only relative, her difficult, gin-guzzling grandmother ‘Ma’ (Neva Carr Glyn). To earn money, Cora sells Bradley fish that she has caught in the sea. She later sells him a chicken which she has stolen from his spinster neighbour Isabel Marley (Andonia Katsaros). When Bradley is suspected of being the thief, he pays Isabel and gets Cora to promise not to steal any more. To help her save enough money to fulfil her dream of becoming a hairdresser in Brisbane, he pays her to be his model. She reinvigorates him, becoming his artistic muse.

Bradley’s work is disrupted when his sponging longtime “friend” Nat Kelly (Jack MacGowran) shows up. Nat is hiding from the police over alimony he owes. When Bradley refuses to give him a loan, Nat invites himself to stay with Bradley. After several days Bradley’s patience becomes exhausted, but Nat then focuses his attention on romancing Isabel, hoping to get some money from her. Instead, she unexpectedly ravishes him. The next day, he hastily departs the island, but not before stealing Bradley’s money and some of his drawings.

Ma subsequently catches Cora posing nude for Bradley and accuses him of carrying on with her underage granddaughter. Bradley protests that he has done nothing improper. Finally, he gives her the little money he has left to get her to go away.

When Cora discovers that Ma has found her hidden cache of money, she chases after her. In the ensuing struggle, Ma falls down a hill, breaks her neck, and dies. The local policeman sees no reason to investigate further, since the old woman was known to be frequently drunk.

Later that night Cora goes to Bradley’s shack, but is disappointed when he seems to view her only as his model. When she runs out, Bradley follows her into the water, and he finally comes to view her as a desirable young woman.