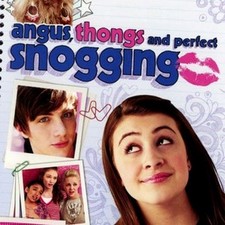 Georgia Nicholson is a 14-year-old girl from Eastbourne who worries about her breasts, fears she will never have a boyfriend and is constantly embarrassed by her mother Connie, father Bob, and little sister Libby. On the first day of the new school term, Georgia and her friends—Jas, Ellen and Rosie, known as her “Ace Gang”—spot two fraternal twin brothers, Robbie and Tom, who have just moved to Eastbourne from London. The girls follow the boys, who are exploring town with their friend Dave “the Laugh”.

Georgia and Jas decide to approach the brothers in their mother’s organic foodshop, where they work. Jas is quickly enamored with Tom and Georgia strikes up a conversation with Robbie. However, they soon discover that Robbie is dating Lindsay, the most popular girl in school. After learning that Robbie likes cats, Georgia pretends that her cat Angus has gone missing and asks Robbie for help finding him. Jas has Angus on a leash in the park, but he escapes and Tom rescues him just as Georgia and Robbie arrive. Robbie leaves to spend time with Lindsay and Tom asks Jas on a date, after which they become a couple.

Meanwhile, Bob moves to New Zealand for a job, while his family stays behind. During his absence, Connie hires a handsome builder, Jem, to redo the living room, and begins to spend increasingly longer periods of time with him, even going to dance classes with him. Georgia worries about the state of her parents’ marriage.

In an attempt to impress Robbie, Georgia takes “snogging lessons” with Peter Dyer. He becomes infatuated with her, and when he tries to kiss her at a party the following night, he ends up embarrassing her in front of Robbie, Lindsay, Jas and Tom. In order to evade Peter, Georgia lies to him about being a lesbian. When Tom invites Jas to go swimming with him and Robbie, Georgia tags along. While in the pool, Robbie and Georgia kiss. Robbie then leaves, but promises to call Georgia later.

After not hearing from Robbie in a while, Georgia is heartbroken. She reads Men Are from Mars, Women Are from Venus and decides to make Robbie jealous so that he realises his feelings for her. She invites Dave to see Robbie’s band, the Stiff Dylans, perform. Upon seeing Georgia and Dave dancing and laughing, Robbie tries to talk to her but is stopped by Lindsay.

At school, Dave confronts Georgia about using him to make Robbie jealous, and so stops talking to her. When Dave tells Robbie that Georgia was using him, he stops talking to her as well. Georgia discovers it was Jas that accidentally leaked this information. After Georgia kicks Jas in the shin during an argument, they vow never to speak to each other again. Shortly afterwards, Robbie tells Georgia he wanted to break up with Lindsay before anything else happened between them, but now he is disappointed with her behaviour.

Feeling like there is no point in staying in England, Georgia decides that she would like to move to New Zealand. She goes to her father’s workplace and breaks down with a woman who works with him, telling her she does not want her family to be apart from each other. Later on, she goes to the beach, knowing Robbie would be there, and apologises to him. Robbie reveals he dumped Lindsay and admits that he still likes her.

On Georgia’s 15th birthday, Connie takes her to a club for the first time. The place initially seems empty, but it turns out to be a surprise birthday party which Jas had secretly organised with Connie. She is greeted by all her friends and family, with Jas and Georgia making amends. Bob returns from New Zealand, deciding to stay in Eastbourne for a better job opportunity, after his boss told him about Georgia’s breakdown. It is also revealed that Jem is gay and his boyfriend is the owner of the nightclub. The Stiff Dylans are performing the song “Ultraviolet” which Robbie had written about Georgia, when they are interrupted by Lindsay who comes from her own party (to which no one had turned up) and tells Robbie that he would either have to take her back or lose her forever. He tells her that Georgia is the one he wants, and he kisses Georgia onstage. Jas then pulls out Lindsay’s breast pads and tosses them into the crowd, prompting a furious Lindsay to storm off the stage.

In the final scene, Georgia is content with how she looks and with her crazy family. As she meets Robbie to walk to school together, she also comments that she found a boyfriend who thinks she is perfect.