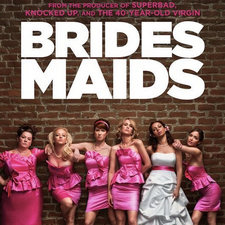 Not the classic many of the reviewers made it out to be but a fun comedy all the same.

Annie Walker is a single woman in her mid-thirties, living in Milwaukee. Following the failure of her bakery due to the recession, her boyfriend left her, and she lost her savings, forcing her to take a job as a sales clerk in a jewelry store and share an apartment with an English immigrant roommate Gil and his sister Brynn. Her business failure was so painful that she has given up baking entirely. Annie has a no-strings-attached sexual relationship with the self-absorbed Ted, but she hopes for something more from him. Her best friend, Lillian, is virtually her only source of happiness.

Lillian becomes engaged to her boyfriend Doug and asks Annie to be her maid of honor. At the engagement party, Annie meets Lillian’s bridesmaids: cynical, worldly, long-married cousin Rita; naïve and idealistic newlywed friend from work Becca; the groom’s decidedly unfiltered sister Megan; and Helen, the rich, beautiful, and elite wife of the groom’s boss. Helen and Annie, who are jealous of each other’s friendship with Lillian, take an instant dislike to each other, but Lillian persuades them to spend time together.

Annie takes Lillian and the bridesmaids to a Brazilian steak restaurant in Chicago for lunch before going to a chic bridal shop. Helen uses her influence to gain entry to the shop because Annie didn’t make a reservation. While trying on gowns, the whole party—with the exception of Helen, who chose not to eat before the fitting— gets diarrhea from food poisoning. Later, Annie’s suggestion of a bachelorette party at Lillian’s parents’ lake house is overruled in favor of a trip to Las Vegas planned by Helen. Worried about her finances and too proud to accept a ticket paid for by Helen, Annie books a ticket in economy class although the rest of the party flies first-class. The trip is cut short by an outburst from Annie, who had accepted a sedative and liquor from Helen because of her massive fear of flying and begins to hallucinate. The plane makes an emergency landing in Casper, Wyoming, and the party takes a bus back home. Annie apologizes, but Lillian decides that she wants Helen to take over planning the shower and the wedding.

Annie continues to hope for a relationship with Ted, but Irish-American Nathan Rhodes, a friendly State Patrol officer who had earlier let her off without a ticket for broken tail lights, begins flirting with her. Nathan encourages her to open a new bakery, but Annie declines. Following a romantic night together, Nathan buys baking supplies as a surprise, in the hopes that Annie will start baking again. Offended and overwhelmed, Annie leaves. Annie is later fired for being rude to a customer, and kicked out of her apartment by her roommates, forcing her to move in with her mother.

Annie travels to Helen’s home in Chicago for the bridal shower, which has become a Parisian-themed event, an idea that Annie previously came up with but Helen turned down. Helen also upstages Annie’s heartfelt, handmade shower gift by giving Lillian a trip to Paris, an idea Helen stole from Annie. Enraged that Helen has taken credit for the Parisian theme and jealous of her relationship with Lillian, Annie throws a tantrum. Lillian kicks her out of the shower and the wedding. On her way home, Annie is involved in a car accident due to her still-broken tail lights, but the other driver flees the scene. Officer Rhodes ends up being the responding officer, and he admonishes her for not fixing her tail lights or taking responsibility for her life. When Annie dismisses him by saying she “knows” he didn’t want anything but sex from her, Rhodes is upset, and storms off when Ted arrives to give Annie a ride. On the ride home, Ted asks Annie to perform oral sex on him. Frustrated, she breaks off the relationship and walks home.

Annie becomes reclusive, refusing to leave her mother’s house and obsessively watching television. Eventually, Megan arrives and gives Annie a pep talk, telling her that she must stop blaming the world for her problems and take control of her life. Annie realizes her errors and begins to repair her life, beginning to bake again and getting her car fixed. She tries to make amends with Nathan, but he is still upset over her previous actions and ignores her. On the day of the wedding, Helen appears at Annie’s doorstep distraught; Lillian has disappeared, and Helen begs for Annie’s help in finding her. While they drive, Helen apologizes to Annie and opens up to her, revealing that people only involve her in their lives because she is good at planning events, but she does not have any true female friends, leading to something of a reconciliation between them. The two enlist Officer Rhodes to help, and he reluctantly agrees. The group finds Lillian at her own apartment, discovering that she ran from her wedding because of Helen’s extravagant planning and from fear of leaving her life in Milwaukee. After reconciling, Annie helps Lillian prepare for her wedding.

Annie resumes her place as maid of honor. After the wedding, which Annie agrees with Helen is “perfect”, Helen again apologizes to Annie, and states her hope that they can be friends in the future. Realizing that Annie and Officer Rhodes were falling in love, Helen also arranged for him to pick up Annie after the wedding. Officer Rhodes and Annie reconcile and the pair ride away in his police car.