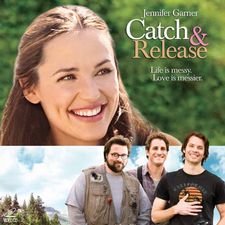 In Boulder, Gray Wheeler attends the funeral of her fiancé, Grady Douglas, on the day they were supposed to be married. Gray seeks solitude behind a shower curtain, where she unintentionally listens to Grady’s best friend, Fritz, having sex with a caterer.

Eve, Grady’s attorney, confirms for Gray that since they were not married, Gray will get nothing. The attorney reveals that Grady had an investment account with a million dollars in it, which Gray knew nothing about.

Gray realizes that she can no longer afford to rent the house that they had picked out. With the help of Grady’s other two close friends, Dennis and Sam, she puts her things into storage and moves in with them. Fritz, currently between directing commercials in California, also comes to stay, which causes tension between him and Gray.

Gray discovers that Grady transferred $3,000 every month to an unknown person. Gray later finds Grady’s cell phone and listens to a string of messages from a woman asking about money. Gray asks Fritz for answers (as it is a Los Angeles number), and he reveals that Grady had a son, whose massage therapist mother depended on the money he sent. Fritz tells Gray that the boy is eight and that he was conceived before she met Grady.

Gray is further troubled when Mrs. Douglas asks her to return the family heirloom engagement ring. She refuses and keeps the ring. The other woman, Maureen, and her son, Mattie, come looking for Grady. Gray learns that Mattie is actually 3 years old and realizes Grady was cheating on her. Gray confronts Fritz, but they end up in a passionate kiss.

Gray does not want anything to do with Maureen, but the guys are reluctant to send the son of their dead friend away so quickly, and they all get to know each other. Over dinner, trying to understand how Grady could secretly cheat on her, Gray blurts out that she equally withheld from him that “catch and release” fishermen are cruel and should just eat the fish.

Sam and Maureen, with similar scattered personalities, develop a connection, but Sam stops her when she initiates sex with him while Mattie is in the room. Gray and Fritz have become intimate. On a day trip to a river, Sam teaches Mattie to fly fish, while Dennis admits to Gray that he has feelings for her. Dennis is upset to learn that Gray and Fritz are an item, but Gray later tells him that her relationship with Fritz is “less than nothing”, not realizing that Fritz can hear her. He believes she does not love him and returns to Malibu.

Mrs. Douglas insists that Mattie take a DNA test before letting him inherit Grady’s money. The test shows that Mattie is someone else’s child. Maureen has no idea how to find the man named Rafael that she had sex with a few days before having sex with Grady, and is unsure how she can support her child without Grady’s money. Gray tells Mrs. Douglas that either she needs to give her family’s money to this child that Grady had loved as his own, or Gray will sell the family engagement ring to help Grady’s mistress support the innocent child.

The group gathers at the dedication ceremony for the peace garden that Dennis has built to memorialize Grady. Mrs. Douglas gives Maureen a cashier’s check for $1 million. She then tells Gray to keep the ring, saying that all she wanted was her boy back. Dennis moves out of the house, and Maureen and Mattie move in with Sam, finding new support but still keeping the Douglas family money. Gray goes to Malibu and finds Fritz playing with his dog on the beach—they embrace and kiss.