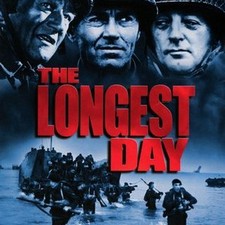 Shot in a docudrama style (with subtitles identifying the different participants), the film opens in the days leading up to D-Day, concentrating on events on both sides of the English channel. The Allies wait for a break in the poor weather while anticipating the reaction of the Axis forces defending northern France. As Supreme Commander of SHAEF, Gen. Dwight Eisenhower makes the decision to go after reviewing the initial bad weather reports and the reports about the divisions within the German High Command as to where an invasion might happen and what should be their response.

Multiple scenes document the early hours of June 6: Allied airborne troops being sent in to take key locations inland, away from the beaches, and the French resistance reaction to the news that the invasion has started. Also chronicled are important events surrounding D-Day: British troops’ glider missions to secure Pegasus Bridge, the counterattacks launched by American paratroopers scattered around Sainte-Mère-Église, the infiltration and sabotage work conducted by the French resistance and SOE agents, and the response by the Wehrmacht to the invasion. Also shown is the uncertainty of German commanders regarding whether this is a feint in preparation for Allied crossings at the Strait of Dover (see Operation Fortitude), where the senior German staff had always assumed that the invasion would begin.

Set-piece scenes include the parachute drop into Sainte-Mère-Église, the advance inshore from the Normandy beaches, the U.S. Ranger Assault Group’s assault on the Pointe du Hoc, the attack on Ouistreham by Free French Forces, and the strafing of the beaches by two lone Luftwaffe pilots. The film concludes with a montage showing various Allied units consolidating their beachheads before they advance inland by crossing France to eventually reach Germany.