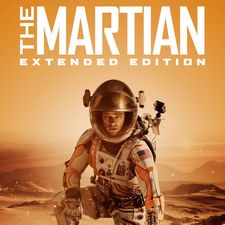 In 2035, the crew of the Ares III mission to Mars is exploring Acidalia Planitia on Martian solar day (sol) 18 of their 31-sol expedition. A severe dust storm threatens to topple their Mars Ascent Vehicle (MAV). The mission is scrubbed and as the crew evacuates, astronaut Mark Watney is struck by debris and lost in the storm. The telemetry from his suit’s biomonitor is damaged and Watney is presumed dead. With the MAV on the verge of toppling, the surviving crew take off for their orbiting vessel, the Hermes.

Watney awakens after the storm, injured and with a low-oxygen warning. He returns to the crew’s surface habitat (“Hab”) and treats his wound. As Watney recovers, he begins a video diary. Lacking communication with Earth, his only chance of rescue is via the next Mars mission, four years later: the Ares IV will be landing 3,200 kilometers (2,000 mi) away at the Schiaparelli crater. Watney’s immediate concern is food; being the mission’s botanist, he improvises a garden inside the Hab utilizing Martian soil fertilized with the crew’s bio-waste, and manufactures water from leftover rocket fuel. He then plants the crew’s unused Thanksgiving dinner potatoes to supplement his food supply. He also begins modifying the rover for the long-distance trek to the Ares IV landing site.

Watney takes the rover to retrieve the nearby Pathfinder probe, which fell silent in 1997. Using Pathfinder’s camera and motor, he establishes rudimentary two-way communication with Earth, first using hand-written signs, and then sending and receiving ASCII in hexadecimal. NASA transmits a software patch to link the rover with Pathfinder and communicate via text. Watney is angry that the Hermes crew is unaware that he is alive; Sanders finally allows Henderson to inform them.

Mars mission director, Vincent Kapoor, and Jet Propulsion Laboratory (JPL) director Bruce Ng prepare an Iris space probe to deliver enough food for Watney to survive until Ares IV’s arrival. Meanwhile, the Hab’s airlock malfunctions, causing an implosion and damaging the structure. Watney repairs and pressurizes the Hab, but the Martian atmosphere has destroyed the current potato crop and sterilized the soil. Believing it a low risk, Sanders orders the routine pre-flight safety inspections be bypassed to expedite the probe’s launch. The rocket explodes 40 seconds after liftoff. Watney now believes his death on Mars is inevitable.

The China National Space Administration has been developing a powerful classified booster rocket, the Taiyang Shen. Feeling camaraderie with NASA’s scientists, they violate their government’s secrecy and offer to repeat the Iris mission. As Watney’s situation grows more risky as time passes, JPL astrodynamicist Rich Purnell devises an alternative plan: have the Taiyang Shen rendezvous with and resupply the Hermes, which will then use Earth’s gravity to “slingshot” back to Mars two years earlier than Ares IV. Sanders rejects the idea, considering it too risky for the Hermes crew; Henderson surreptitiously sends Purnell’s plan to the crew who unanimously vote to implement it. They disable NASA’s remote controls and make the course change. Powerless to stop them, NASA concedes the issue.

Watney begins the 90-sol journey to Schiaparelli, where the MAV for Ares IV has been pre-positioned. The MAV needs to be lightened to intercept with Hermes on its new course. Watney removes many components, and replaces the nose cone with canvas. After takeoff, the MAV fails to reach the required speed. Commander Lewis maneuvers the Hermes to decelerate, consuming much fuel. She also orders an directional explosive decompression of the internal atmosphere to better align the ship. In a Manned Maneuvering Unit, Lewis is unable to reach Watney when the tether falls short. Watney pierces his pressure suit, using the escaping air to successfully propel himself to Lewis. He and the crew are reunited after Mark’s 560 sols alone on Mars.

After returning to Earth, Watney becomes a survival instructor for astronaut candidates. Five years later, as the Ares V is about to launch, those involved in Watney’s rescue are seen in their current lives.