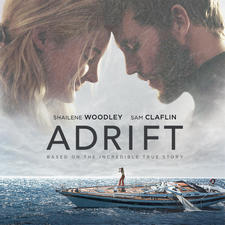 Five months before the hurricane, Tami Oldham arrives in Tahiti on board the schooner Sofia and meets Richard Sharp, a British sailor. Richard invites Tami for dinner aboard his boat Mayaluga. The two of them spend more time together and begin to plan a trip to sail to Japan.

While downtown one day, Tami and Richard bump into Peter and Christine Crompton, owners of the Hazaña, a luxury Trintella 44 yacht. The Cromptons offer Richard $10,000 and a return first-class ticket back to Tahiti to sail Hazaña to San Diego, California. Richard accepts the offer, on the condition that Tami come along and that they also give her a return ticket. Later, he proposes to Tami with a handmade ring, and she accepts.

The couple depart aboard the Hazaña, and after many uneventful days at sea, Tami and Richard receive news of an approaching cyclone, Hurricane Raymond, but decide to continue to San Diego anyway. As the storm hits, Tami tries to radio for help, with no response. The storm alters course and the yacht enters the eye of the storm. Richard and Tami have no choice but to lower the sails to prevent the boat from capsizing. Tami almost falls off the yacht as it is hit by powerful waves. Richard professes his love for her and demands that she go below where she will be safer. Hazaña is repeatedly flipped as it is hit by a towering wave. Tami is thrown about, suffering a head wound. Richard is thrown overboard after being knocked unconscious by the mast and his safety harness breaks. He slowly sinks into the ocean, while the Hazaña is flipped, rights itself and floats to the surface.

Tami regains consciousness and struggles to understand what has happened. She urgently searches the crippled yacht in hopes of finding Richard and realizes that he was swept overboard. Tami screams in anguish and it is revealed that she is all alone, with no ships or land in sight. Tami finds that the engine will not start, and no one hears her radioed distress calls. She believes she has spotted the lost dinghy with Richard clinging to it, and she tries to steer the yacht towards him. She falls off and nearly drowns as she swims to rescue Richard. After dragging him aboard, Tami realizes that he has broken ribs and a shattered right shin. She fashions a makeshift sail using a broken pole and a storm jib, allowing her to sail toward Hawaii.

One night, she sees a large cargo ship heading straight for the Hazaña and fires multiple flares, but the ship sails on past them. Tami wonders if she has been hallucinating, and Richard begins to suffer from a high fever. As the sun rises the next morning, Richard reminds Tami that a red morning sky warns of an approaching storm. Expecting a storm to hit, Tami prepares by creating a makeshift shelter, though the storm turns out to be just a minor squall.

The next day, Richard has disappeared. Tami realizes the injured Richard on board the Hazaña was nothing but a hallucination and surrenders to the reality that Richard was lost at sea. On the 41st day, Tami finally spots land and a Japanese research vessel in the distance and fires off two flares, successfully attracting its attention. The vessel lowers food and water supplies to Tami and tows the Hazaña to shore. Tami returns to Tahiti after recovering and visits Richard’s boat, bursting into tears after seeing the photos of Richard and herself. She goes to the beach with a frangipani flower, places her engagement ring around the flower, and lets it go in the water.

It is revealed in the credits that Richard Sharp was swept overboard and never found; Tami Oldham Ashcraft survived alone aboard the Hazaña for a total of 41 days before she was rescued. She continues to be an avid sailor. During the credits, a series of news articles, pictures and a video of the actual Tami and Richard are shown.