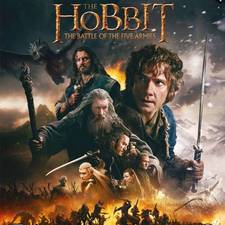 The Hobbit: The Battle Of The Five Armies

Congratulations if you made it this far, a good example of how not to pad a relatively short story into a three movie adventure.

Bilbo and the Dwarves watch from the Lonely Mountain as the dragon Smaug sets Laketown ablaze. Bard breaks out of prison, and eventually kills Smaug with the black arrow brought to him by his son Bain. Smaug’s falling body crushes the fleeing Master of Laketown and his cronies, who were escaping on a boat laden with the town’s gold. Bard becomes the new leader of the people of Laketown, with the Master’s conniving servant, Alfrid, acting as Bard’s reluctant servant, as they seek refuge in the ruins of Dale, while Legolas travels to investigate Mount Gundabad with Tauriel. Thorin, now struck with “dragon sickness” over the vast treasure in the mountain, searches obsessively for the Arkenstone, which Bilbo had previously found but kept hidden. Upon hearing that Laketown survivors have fled to Dale, he orders the entrance of the Lonely Mountain sealed off.
Meanwhile, Galadriel, Elrond, and Saruman arrive at Dol Guldur and free Gandalf, sending him to safety with Radagast. They battle and defeat the Nazgûl and a formless Sauron himself, banishing them to the East. Azog, marching on Erebor with his vast Orc army, sends his son Bolg to Gundabad to summon their second army. Legolas and Tauriel witness the march of Bolg’s army, bolstered by Orc berserkers and giant bats.

Thranduil and an Elf army arrive in Dale and form an alliance with Bard in order to reclaim a treasure once withheld from them by Thrór. Bard goes to the mountain and asks Thorin for the share of gold that he had previously promised the people of Laketown, but Thorin refuses. Gandalf arrives at Dale to warn Bard and Thranduil of the threat posed by Azog, but Thranduil dismisses him. Bilbo sneaks out of Erebor to hand the Arkenstone over to Thranduil and Bard so that they can trade it for the treasures they were promised and prevent a battle. When Bard’s and Thranduil’s armies gather at the gates of Erebor, offering to trade the Arkenstone for the promised treasures, Thorin angrily refuses to believe they have the Arkenstone until Bilbo admits giving it away and chides Thorin for letting greed cloud his judgement. Outraged by what he sees as betrayal, Thorin nearly kills Bilbo, but Gandalf appears and shames Thorin into releasing Bilbo. Thorin’s cousin Dáin arrives with his Dwarf army, and a battle of Dwarves against Elves and Men ensues, until Wereworms emerge from the ground, releasing Azog’s army from their tunnels. With the Orcs outnumbering Dáin’s army, Thranduil and Bard’s forces, along with Gandalf and Bilbo, join the battle, fighting the Orcs. However, a second front is opened when many Orcs, Ogres, and Trolls attack Dale, forcing Bard to withdraw his forces to defend the city, while Alfrid takes a pile of gold and flees from Dale to his ultimate fate.

Inside Erebor, Thorin suffers traumatic hallucinations before regaining his sanity and leading his company to join the battle. He rides towards Ravenhill with Dwalin, Fíli, and Kíli to kill Azog; Bilbo follows them, using his magic ring to move through the combat unseen. Meanwhile, Tauriel and Legolas arrive to warn the Dwarves of Bolg’s approaching army. Fíli is captured, and Azog kills him as Bilbo and the other Dwarves are forced to watch. As Thorin engages Azog in a fight to the death, Bolg knocks Bilbo unconscious, overpowers Tauriel and then kills Kíli, who had come to her aid. Legolas battles Bolg and eventually kills him. Thorin kills Azog, but is fatally wounded in the process. The Great Eagles arrive with Radagast and Beorn to fight the newly arriving Orc army, and the Orcs are finally defeated. Bilbo regains consciousness and makes peace with the dying Thorin. Tauriel mourns Kili, and Thranduil acknowledges their love. Legolas then tells Thranduil he must leave, and Thranduil advises him to seek out a Dunedain ranger in the north who goes by the name Strider. When asked what his real name is, Thranduil says he will have to discover it himself. Meanwhile, Thorin is buried with the Arkenstone along with Kili and Fili, leading to Dáin being crowned king.

As Thorin’s company begin settling back into Erebor (with Dáin now the king), and Dale begins to recover with Bard as the leader, Bilbo bids farewell to the company’s remaining members and journeys home to the Shire with Gandalf. As the two part ways on the outskirts of the Shire, Gandalf admits his knowledge of Bilbo’s ring and warns him that magic rings are not to be used lightly, although Bilbo assures him he lost the ring. Bilbo returns to Bag End to find his belongings being auctioned off because he was presumed dead. He cancels the sale, but finds his home pillaged; he starts to tidy up and settle back in, revealing he still possesses the ring. Sixty years later, Bilbo receives a visit from Gandalf on his 111th birthday.