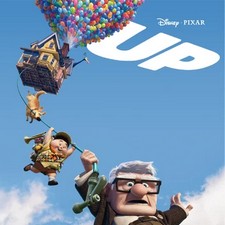 For a Pixar film mainly aimed at children this is a humorous but also very poignant tale.

Young Carl Fredricksen idolizes explorer Charles F. Muntz. When accused of fabricating the skeleton of a giant bird he brought back from Paradise Falls in South America, Muntz leaves, and vows not to return until he has captured one alive. Carl meets a girl named Ellie, also a Muntz fan, who confides her desire to move her “clubhouse”—an abandoned house in the neighborhood—to a cliff overlooking Paradise Falls. The two later marry and live in the restored house, and Carl works as a balloon salesman. Suffering a miscarriage[4] and unable to have children, they decide to save up to go to Paradise Falls, but are constantly forced to spend their savings on more urgent needs. Now elderly, Carl finally arranges for the trip, but Ellie falls ill and dies.

Years later, Carl, now retired, stubbornly holds out in the house while the neighborhood around him is replaced by skyscrapers. When Carl accidentally strikes a construction worker during a mishap, the court deems him a public menace and requires him to move to a resting house. However, Carl resolves to keep his promise to Ellie to go to Paradise Falls, turning his house into a makeshift airship using thousands of helium balloons and flying away. Russell, a young “Wilderness Explorer” who visits Carl in an effort to earn his final merit badge for assisting the elderly, becomes an accidental stowaway. Before Carl can land and send Russell home, they encounter a storm which drives them all the way to South America.

The house lands on a tepui opposite Paradise Falls. Carl and Russell harness themselves to the still-buoyant house and begin to walk it across the mesa, hoping to reach the falls before the balloons deflate. Russell encounters a giant, colorful flightless bird, whom he names “Kevin”. They then meet a Golden Retriever named Dug, who wears a special collar that allows him to speak and who vows to take the bird to his master. The next day, they encounter a pack of aggressive dogs led by Alpha, a Doberman Pinscher, and are taken to their master, who turns out to be an elderly Muntz. He invites Carl and Russell aboard his dirigible, where he explains that he is still searching for his giant bird. When Russell notes the skeleton’s resemblance to Kevin, Muntz becomes hostile, believing they are attempting to capture the bird themselves.

Carl, Russell and Dug flee, and are pursued by the dogs. Kevin saves them, injuring her leg in the process. Carl agrees to help her get home, but just as Kevin is ready to reunite with her chicks, Muntz captures her and starts a fire beneath Carl’s house, forcing him to choose between saving it or Kevin. Carl saves the house and eventually reaches the falls, but Russell is upset at Carl for abandoning Kevin. Carl looks through Ellie’s childhood scrapbook and is surprised to find that she has filled in the blank pages with photos of their marriage, along with a note written from her hospital bed, thanking him for the “adventure” and encouraging him to have a new one.

Reinvigorated, Carl goes outside, only to see Russell flying away, using some balloons and a leaf blower, to rescue Kevin. Carl throws out his furniture and keepsakes, lightening the house enough to follow. Muntz captures Russell, but Carl and Dug board the dirigible and free both Russell and Kevin. Muntz pursues them to Carl’s house, but they escape by jumping back to the airship, while Muntz gets caught on some balloon lines and falls to his death. The house, having lost too many balloons, descends out of sight through the clouds.

Carl and Russell reunite Kevin with her chicks and fly the dirigible back home, taking all of Muntz’s dogs with them. Russell receives his “Assisting the Elderly” badge, and Carl presents Russell with a grape soda bottle cap that Ellie gave to Carl when they first met, which he now dubs “The Ellie Badge”. Meanwhile, unbeknownst to Carl, his house has landed on the cliff beside Paradise Falls, fulfilling his promise to Ellie.