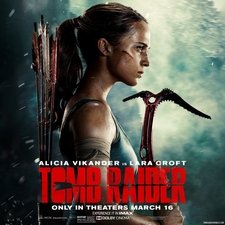 Not as bad as many remakes and holds its own as an adventure movie but clearly made by a studio who chose to ignore the original appeal of Lara.

Following the disappearance of her father, Lord Richard Croft, Lara Croft makes a living as a bike courier. When she is arrested after a bike accident involving a police car, Richard’s business partner Ana Miller posts her bail. Lara has never claimed her inheritance for many years as she believes her father to still be alive, but Miller warns Lara that if she does not claim it, her father’s country estate, Croft Manor, will be sold off. Lara reluctantly accepts and gains access to a secret chamber in her father’s tomb. There she finds a pre-recorded video message from Richard detailing his research into Himiko, the mythical Queen of Yamatai who was said to command the power over life and death. Richard warns Lara to destroy all of his research, but she ignores his warnings so that she can investigate further.

Lara travels to Hong Kong where she hires Lu Ren, captain of the ship Endurance, to sail into the Devil’s Sea and the island of Yamatai. The ship capsizes in a violent storm and Lara is washed ashore where she is knocked unconscious. She awakens only to encounter Mathias Vogel, the leader of an expedition to locate Himiko’s tomb. The expedition has been funded by a shadowy organization called Trinity, which seeks to harness and weaponize Himiko’s power. Vogel takes Lara prisoner, claiming that he killed her father and revealing that he intends to use Richard’s research to continue his expedition. He adds Lara and Lu Ren to his slave force; eventually, the two of them try to escape, and Lara is the only one successful.

After surviving rapids and narrowly avoiding going over a waterfall with the wreck of a wartime airplane, Lara is forced to kill a Trinity guard after nightfall. She follows a mysterious figure through the jungle, and discovers that the figure is her father, who stayed on the island to prevent Trinity from finding Himiko’s tomb. After Lara convinces him that she is real and not a figment of his imagination, Richard treats her injuries. Despite his protests, Lara sets off the next morning to steal Vogel’s satellite phone. Lara makes contact with Lu Ren, and he, along with the other slaves, stage a distraction that allows Lara to infiltrate the Trinity camp and take the phone. In the ensuing chaos, Lu Ren commandeers an assault rifle, provides cover for the escapees and guns down several Trinity soldiers, while Richard makes his way to Himiko’s tomb and is captured by Vogel, who persuades Lara to open the tomb, something she has prepared for since she was a child. At that point, the entrance to the tomb self-destructs and falls away, thus enabling the party to enter that which has not been seen for at least two thousand years.

The party navigates a series of booby traps and locates Himiko’s sarcophagus. When a Trinity soldier attempts to remove her corpse, he is infected by a highly infectious pathogen that reduces those infected to an aggressive zombie-like state. Lara realizes that Himiko was an asymptomatic carrier of the virus, who chose to entomb herself so that she could not infect others. Vogel concludes that he cannot remove Himiko’s body and instead settles for detaching a finger, which he seals in a pouch. In the confusion, Lara and Richard overpower the remaining soldiers, although Vogel escapes and Richard becomes infected. Knowing there is no cure, Richard proposes destroying Himiko’s tomb to prevent the disease from spreading across the world. Lara pursues Vogel as Richard sets off a bomb, killing himself and sealing the tomb. Lara confronts and kills Vogel by infecting him with the finger. She escapes the tomb as it collapses, regrouping with Lu Ren and the slaves; they commandeer a Trinity helicopter to escape Yamatai.

Lara returns to London, where she formally accepts her inheritance and inadvertently discovers that Trinity’s front company, Patna, is actually a subsidiary of Croft Holdings. She proceeds to investigate Trinity further and begins to suspect that Ana is one of their agents who manipulated her into accepting her inheritance; this was to have Lara sign over control of Croft Holdings’ business operations to her when Richard stopped cooperating with Trinity. Having witnessed Trinity’s ruthlessness firsthand, she prepares for her next adventure.

In a mid-credits scene, Lara returns to Alan’s pawn shop to buy back her pendant and decides to take two identical pistols.