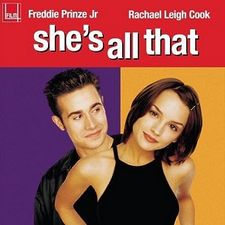 Quite possibly one of the chessiest teen movies ever but I absolutely love it.

Zackary Siler (Freddie Prinze Jr.) is the big man on campus at his Southern California high school. His popular and narcissistic girlfriend, Taylor Vaughan (Jodi Lyn O’Keefe), ditches him for a crude reality TV star from The Real World, Brock Hudson (Matthew Lillard), whom she met on Spring Break in Florida. Zack consoles himself, claiming that Taylor is replaceable by any girl in the school. Zack’s friend, Dean Sampson, Jr. (Paul Walker), disagrees and challenges him to a bet on whether Zack can turn any random girl into the Prom Queen within six weeks. Dean chooses Laney Boggs (Rachael Leigh Cook), a dorky, solitary, unpopular art student.

Zack attempts to befriend Laney, but fails utterly, as she pointedly ignores his advances and walks away. Zack’s sister Mac (Anna Paquin) encourages him to try again, and make a proper effort to get to learn what Laney is interested in and cares about. Zack approaches Laney again at her workplace and with the help of Laney’s childhood friend, Jesse Jackson (Elden Henson) convinces her to give him a chance. Laney takes him to a small theater lounge where she will be performing. Intending to deter him, Laney has Zack called on stage to perform. Zack manages to improvise a show with the Hacky Sack he happens to carry in his pocket. Laney is impressed by the performance, but rejects him again after he attempts to charm her.

Zack befriends her brother, Simon (Kieran Culkin), and in an attempt to stop this, Laney agrees to go to the beach with him once. Dean unexpectedly shows up with the popular crowd, and Laney gets a chance to know them all. Preston (Dulé Hill) invites them to a party at his house that night. Laney pretends to be busy but Zack persuades her go, and enlists his sister to give her a makeover, transforming her and revealing her true beauty. At Preston’s, Taylor is embarrassed by Brock and jealous of Laney, whom she publicly humiliates and brings to tears. Outside Zack consoles Laney, telling her that by opening up to people there will be some bad with the good.

Newly popular, Laney is surprised to be nominated for Prom Queen and competes with Taylor for the crown. Zack and Laney begin to genuinely fall for each other; Taylor is humiliated when Brock ends their relationship, as he is leaving for Road Rules: All Stars. Dean begins to show an interest in Laney, aggravating Zack. Dean tries to invite Laney to prom, but she refuses. After falling out with Zack, Dean deliberately tells Laney about the bet and she forces a confession from Zack in public. Humiliated, Laney refuses to see Zack again.

Unable to reconcile with Laney, Zack takes his sister to the prom, while Taylor arrives alone, thinking that Zack is still interested in her despite his refusal of her advances. A disheartened Laney reluctantly dresses up after some persuasion from her father Wayne (Kevin Pollak) and goes to the dance with Dean after he shows up at her house in a tuxedo to invite her again to be his prom date.

At the prom, after a dance scene presided over by the school’s resident DJ (Usher Raymond), Mac meets Jesse and they become friends. In the bathroom Dean boasts that he is succeeding in seducing Laney and has rented a hotel room with intention of having sex with her. Jesse overhears, and tries to tell Mac and they rush to warn Zack. Taylor is crowned Prom Queen with just over half the votes. Laney is magnanimous, as she believes the right person won, and leaves the prom with Dean. Zack attempts to intervene but is too late and loses track of them.

Laney returns home, to find her father and Simon waiting up for her, and Zack is there waiting too. Laney explains how she fought off Dean’s advances by deafening him with an air horn. Zack confesses his true feelings to Laney, and asks for forgiveness as well as the chance to further their relationship, which she grants and the two officially become a couple. Laney tells Zack that she is considering art school after graduation, and Zack jokingly tells her that she has inspired him to pursue a career in performance art. After they dance and kiss, Laney asks Zack about the bet, and Zack responds that he will honor the terms.

At the graduation ceremony, it is revealed that Zack must appear nude on stage. Zack is wearing only a graduation cap and strategically carrying a soccer ball to cover himself. Zack takes the stage; Laney catches the soccer ball and reacts with a smile as the students applaud.