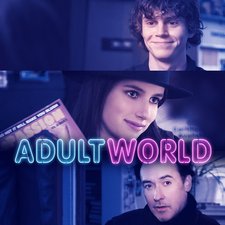 Recent college graduate Amy believes she’s destined to be a great poet. Pressed by her parents to earn a living, she takes a job at a small sex shop, Adult World, where she works with the manager, Alex. When her car is stolen, her parents discover that she had cancelled the car’s theft insurance to afford submission fees for poetry journals, and kick her out. She briefly moves in with a coworker, trans woman Rubia, before finding her own apartment.

She meets one of her favourite poets, Rat Billings, and talks her way into being his protégée by offering to clean his house. After some cajoling, Billings reads her poetry and offers to feature her work in an anthology he is working on. One night, she gets drunk and makes a clumsy attempt to seduce him, but he rebuffs her advances.

Alex fires Amy after she fails to catch a shoplifter; angered, she says she is too good to work there. She soon discovers that she misses Alex, however, and realizes that she has feelings for him. She apologizes to him and asks for her job back. Alex rehires her, and they begin hanging out. At Amy’s birthday party, Billings gives her a copy of the poetry anthology he featured her work in—Shit Poems: An Anthology of Bad Verse. Furious and humiliated, she confronts him and calls him a has-been. She goes home and tries to commit suicide by asphyxiating herself with a plastic bag, but changes her mind at the last second.

The next day, she makes peace with Billings: he tells her that she needs to do more living before she can fulfil her potential as a writer, while she tells him not to take himself so seriously. Later, she sleeps with Alex, and they become a couple. She finds out she has been published in an erotica magazine that she submitted prose to as a joke. She and Alex go to a party together to celebrate, and he encourages her to keep writing. The film ends with Amy reading Shit Poems with a smile on her face.

In the epilogue, next to the credits, she becomes a well-known poet and arranges her first poetry book on a shelf in a bookstore to be more prominently shown.