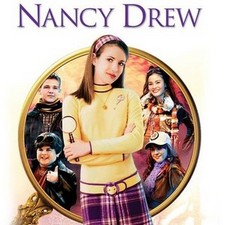 Nancy Drew, an amateur sleuth, and her widowed father, Carson Drew, move from their quaint hometown River Heights to California, where Carson has a temporary job. Carson encourages Nancy to focus on living like a normal teenager, instead of getting herself into trouble with crime- and mystery-solving. However, unbeknownst to Carson, Nancy chose their California house because of its famously unsolved mystery of the death of the movie star Dehlia Draycott. Nancy struggles to fit in at her new school, only befriending a younger boy, Corky. She wears 50’s outfits and penny loafers, becoming subject to teasing from Corky’s older sister and her best friend. After discovering many clues about the Draycott mystery, she begins secretly sleuthing behind her father’s back. Nancy eventually finds Draycott’s lost child, Jane Brighton, who turns out to be the sole beneficiary of Draycott’s will, which has disappeared. Nancy contacts her father’s business associate, Dashiel Biedermeyer, the lawyer of the Draycott estate, to assist her with the case.

Meanwhile, as an early birthday present, Ned Nickerson, Nancy’s good friend with implied romantic interest, visits from River Heights. Corky becomes jealous of Nancy and Ned’s close relationship and tries his best to get Nancy’s attention. Nancy begins experiencing worsening attacks against her as she learns that someone does not want her to solve the case. One afternoon, a tearful Jane arrives on Nancy’s doorstep and announces that her daughter has been taken away from her. While watching a Dehlia Draycott film, Nancy realizes that Draycott has hidden her will in a prop from one of her last movies. After retrieving the will, Nancy is kidnapped by the villain’s henchmen. Nancy escapes with the will but gets into a car crash. Her father arrives and demands to know what is going on. After explaining her sleuthing, Biedermeyer offers them a ride home so he can finalize the legacy to Jane.

Nancy concludes that Biedermeyer was Dehlia Draycott’s supposed love who stands to lose money if the will goes to Jane. However, when he questions Nancy about the will, she manages to jump out of the car. She is caught by Biedermeyer who threatens her; when Nancy asks him why he killed Dehlia, he replies that Dehlia went crazy after she put Jane up for adoption, and wanted to leave to be with her caretaker Leshing. Nancy escapes but is once again cornered. Leshing arrives and knocks the henchmen unconscious as Nancy reveals that she secretly recorded Biedermeyer’s confession. While the police arrive to arrest Biedermeyer, Nancy reveals to Leshing that Jane is his daughter. The will is restored to Jane, who is able to get her daughter back and convert the Draycott mansion into a home for single mothers.

Back at River Heights, Nancy visits Ned as he repairs her car and they share a kiss. She receives a long-distance phone call regarding a new mystery in Scotland.