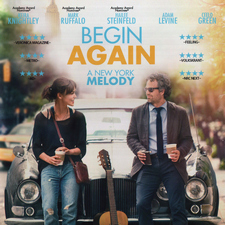 Dan Mulligan is a formerly successful record label executive living in New York City who is estranged from his wife Miriam and struggling to keep up with the changing music industry. After being fired from his job, he goes on a drinking binge which leads him to a bar in the Lower East Side where he encounters Gretta James. Gretta is a young and fiercely independent songwriter who has just broken up with her long-time boyfriend and songwriting partner Dave Kohl, a newly successful musician who had an affair with one of his producers’ assistants. Captivated by Gretta’s music, Dan offers to sign her to his former record label, and although she initially refuses she reconsiders the offer and agrees.
Dan and Gretta meet with Saul, Dan’s business partner and co-founder of their record label, but he does not see the same potential in Gretta and turns her away. Undeterred, Dan proposes that he and Gretta produce their own album together, to be recorded live during the summer at various public locations around New York City. Recruiting a team of talented musicians, including Steve (a busker and an old best friend of Gretta’s), Dan sets out to make an album worthy of being published by his label. During this time, Dan and Gretta bond both personally and professionally, and Gretta takes Dan’s teenage daughter Violet, a fledgling guitarist, under her wing and encourages her to play on the album.

When Gretta sees Dave accepting an award on television, she criticizes him for selling out to the music industry and, with the help of Steve, she expresses her grievances with him in a song which she records on his voice mail. A remorseful Dave, who is back in New York to promote his new album, returns her call and asks to see her. After some consideration, she decides to meet with him and they critique each other’s albums. Gretta feels betrayed by Dave’s heavily commercialized rendition of “Lost Stars,” a love ballad she had once written and composed for him as a Christmas present, believing that the true meaning of the song has been lost. Dave tells her that the audiences love when he plays it in the new way, and that their energy fills the room. He believes that music is about sharing it with people, but Gretta tells him that’s not what she intended for that song. Nevertheless, Dave invites her to come and hear him play the song at the Gramercy Theatre that weekend so that she can see the impact it has had on his fans.

When the album is finished, Dan and Gretta meet again with Saul, who is very impressed with their collaboration. Gretta demands that Saul give Dan his job back and give her a bigger share in the deal. They leave without reaching an agreement, but Dan feels confident that Saul will eventually sign Gretta to the label. Later, after receiving a text message from Dave reminding her of his concert and much consideration, Gretta arrives at the venue just in time to watch Dave play her original arrangement of the song, but as she watches him play and sees the reaction of the crowd to the song and how Dave responds to their adoration by transitioning into the commercialized arrangement of the song, she realizes that he is a lost cause. Gretta then leaves the concert and cycles through the city with newfound closure and a dawning smile on her face.

Afterwards, Gretta visits Dan at his apartment as he prepares to move back home, having made amends with his wife. She tells him that she does not want him to release her album, instead preferring to distribute it online for $1. Although Dan returns to work with Saul, he agrees to let Gretta release the album online and helps her to promote the release. The next day, Saul jokingly fires Dan for promoting Gretta’s album and informs him that it sold 10,000 copies in its first day of release.